Aquaskipper will let you walk on water, literally! 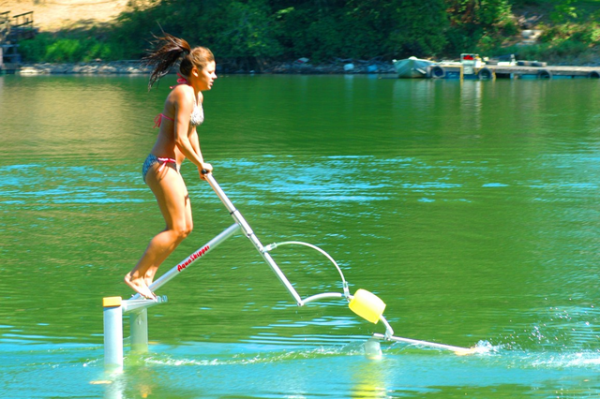 So far Our Lord and Criss Angel have been the only people known to have successfully walked on water in recorded history and even that has been disputed by non-believers. Many gifted designers in years gone by have tried to come up with contraptions that could aid in the near-miraculous feat but even the supremely talented Leo DaVinci found it hard to get the idea off the drawing board and into an actual working prototype. But this human-powered watercraft could change all that and help many of us, well, walk on water.

The Aquaskipper Hydrofoil Human Powered Watercraft is a revolutionary new product fresh off the production lines which could be the ultimate breakthrough in water-trodding technology. Fashioned out of lightweight aluminum, the kinds that is used to make aircrafts, the design is eco friendly, causes no noise pollution, no water pollution and is completely safe to use.

Using a patented design, the AquaSkipper comes laced with hydrofoil wings that have marginal drag in water and a fiberglass spring mechanism that help users to get the vehicle moving across the water’s surface simply by hopping up and down on it! The basic mechanism of the watercraft allows each jump to create enough force to compress the fiberglass spring which in turn causes the angled back foil to push downwards and generate enough propulsion to move the craft forward. Since the front foil of the craft is locked at a specific height while it is in the water via the skimmer, the craft thus glides across the water surface smoothly.

The 6 feet long craft has a wingspan of 7 feet and can be assembled and dissembled with ease making it an ideal vacation sport essential. Weighing in at a mere 26 kgs, it is also relatively easy to carry in the tote bag that comes with the $495 purchase.

The AquaSkipper has also been featured on prestigious shows like Discovery Channel’s MythBusters, MTV’s Parental Control, I Want That! on HGTV and, Beyond Tomorrow. The design has also won numerous awards including the international award for new sport-related inventions at ispo BrandNew in Munich, Germany and as well as a cool semi-final spot in the History Channel’s Modern Marvels Invent Now Challenge in 2007.

Via: Gadgets and Gear

Aquaskipper will let you walk on water, literally! was last modified: August 5th, 2012 by admin

The Loop, mobile phone for the visually...

Shair Chair doubles as a workstation

Solar Decathlon – Modular furniture for a...