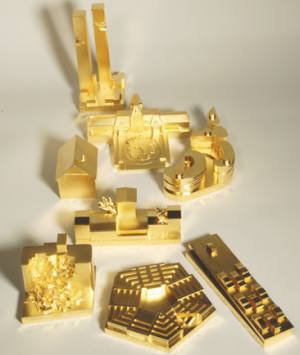 On the occasion of Design Miami 2007 this month, US-based designers Constantin Boym and Laurene Leon Boym, renowned for their creation of the Buildings of Disaster series, displayed a partial gold-plated version of the same series. Buildings of Disaster are considered to depict architectural brilliance across the world. They portray well-known buildings in miniature forms.

Innumerable people every year pay their tribute to the Gettysburg battlefield or the site where Diana, Princess of Wales died in a road mishap. The magnificent looking architectural replicas vividly represent some place associated with any horror-stricken human tragedy, incidents of aggression and violence. This series was commenced in 1997 and has been successful in retaining some of the memorable places/building structures with some tragic history as ‘souvenirs’ or symbols of disastrous past to be cherished forever.