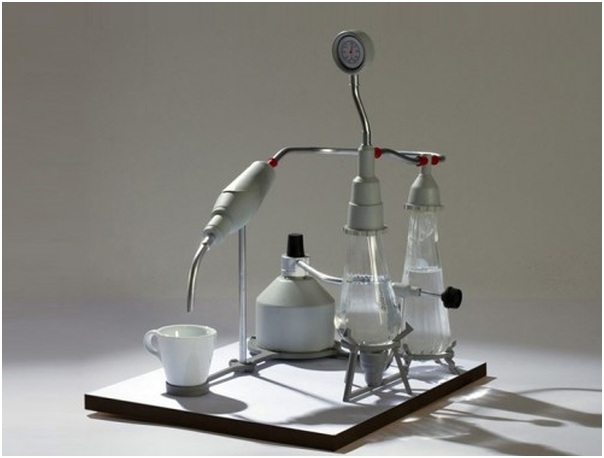 Laboratory Espresso Machine trickles coffee making down to a science

There are a lot of people in the world that for whom their morning cuppa holds the key to what the rest of their day will be like. Even though there are no scientific studies on the matter, people believe that if a person doesn’t get to have a cup of coffee that is prepared to their exact taste, they end up in a crappy mood for the rest of the day. Most people have their own way of preparing the perfect cup of Joe, some rely on the accuracy of very expensive coffee machines while others stand patiently in queues at coffee chain outlets to get coffee that tastes just right. For folks who believe that the process of making coffee is more of an exact science than art, this incredible ‘Laboratory Espresso Machine’ could be a perfect gift.

Even though the coffee machine doesn’t really use any real science to deliver a number of coffee variations, it looks just so darn incredible. Created by Israeli designer duo Adi Schlesinger and David Budzik, the scientific aesthetic of the Laboratory Coffee Machine allows users to see the making of a single cup of coffee in great detail. The machine uses principles of thermo dynamics and a law of physics known as the “Venturi Effect” to transform ingredients into a magnificent cup of the beloved beverage.

The machine employs espresso capsules that are punched using a technique employed in automatic weapons to add the coffee at just the right strategic moment. The entire machine is made using a classic-style barometer, an aluminum frame structure and reinforced glass and polymer elements that make it look authentically old school. The entire set up is cool enough to be displayed on the mantle though it does take up a lot of space on the kitchen counter!

Swarming Robots – The Future of Robotics

5 of the Coolest Laptops