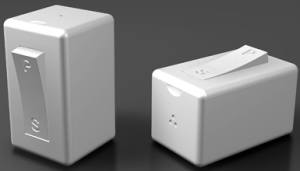 File this under the ‘nothing but indulgence’ category. To actually call this ‘indulgence’ is probably over stating it. Let’s just say that this is ‘daft & fun’. Someone, somewhere has finally decided that all the fuss about 3 holes or 1 holes on top of salt and pepper shakers ridiculous (and I totally agree with that) and so just used a damn simple switch to make sure one does not get confused. I mean the last time I was eating out with my friend; she started quizzing me about ‘Do you know which shaker has how many number of holes?’

Now someone like me has absolutely no clue about such nonsense as I would much rather try both out and see which is what. Now the funny part is that she came up with the answer, but the restaurant had used the opposite of what she said. It seems every restaurant has its own way of putting salt & pepper in the shakers. ‘Switch Me’ is a simple invention designed by Chetan Sorab, which allows you to switch between salt & pepper without all the fuss (and not to mention the quizzing for me.)

Switch Me has a simple ‘S’ & ‘P’ marked on top of it to avoid all the nonsense and is sure to make things a bit simpler for thick heads like me and hopefully make us look less like an idiot. It is shaped in a simple and square way. Maybe it will make its way on top of your dining table, but beyond that nothing home to write about this one.

Gigantic tunnel made from thousands of books...

WaveBox: Portable microwave for cooking on the...

The Tepee Shower and Outhouse with fiberglass...

Grenade Furniture: A functional bomb for your...