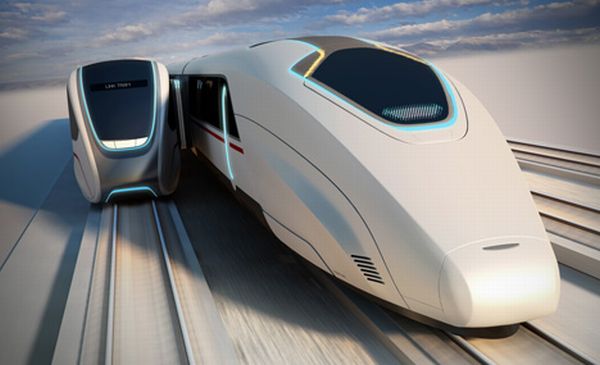 It may appear like a lift straight from an action sequence of a movie, but the designer puts it as the future of train traveling when the platform will move along with the train. Conceived by the industrial designer Paul Priestman of Priestmangoode, the high-speed trains will not stop at the platforms, as it is time-consuming, rather transfer the passengers to the local service trains or trams, while still moving in high speed. The concept of moving platform is by the same designer who designed Virgin Pendolino and Mercury high speed concept train.

How this will take place is even more interesting. The local trains or trams will dock alongside the long distance train and while still in motion the trains will allow the passengers to move from one train to another. The trains will connect to each other physically via docking system. Once the transfers are done both the trains will take their own separate ways. The local train or tram will act as a platform to take passengers disembarked from the long distance train to the local destination and letting the other train move with the same speed to its destination.

As the designer calls it “The train travel of 21st century,” the concept seems to be appealing as most of the areas already have two train lines, one for the long distance trains connecting one state/region (or even nation) to another and a parallel line for local trains or trams. So, the idea of connecting both the lines does not seem to be impossible. One thing is for sure, if the concept of moving platform realizes, it is definitely going to change the face of the train travel forever. It’s absolutely an idea to look forward as it will definitely change our live and save our travel time as well.