Sun–brella: A hi-tech way to chill at the beach 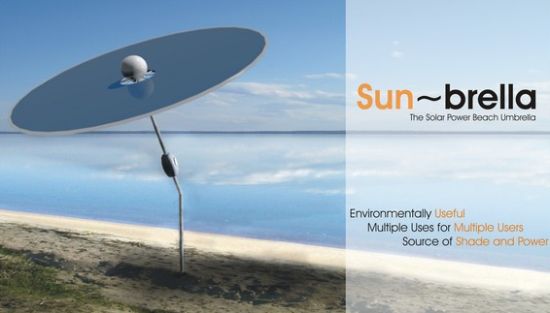 A regular day at the beach might not be as regular as it used to be in the past anymore. With technology increasingly pervading every aspect of lives, from how we eat, to how we drive, and even how we sleep, it should not come as any surprise that a device like this would be created. Ever since solar panel technology became more implementable, there has been a race to capture markets for all kinds of solar devices, and what better place for this than the beach with the abundance of sunshine found there. The Sun-brella is a beach umbrella that lets you relax in style. Outfitted with a fan of its own as well as a power outlet, it is supposed to generate enough power to run even a small refrigerator.

The Sun-brella’s features might seem a little excessive, since most people take ice-coolers to the beach and enjoy the cooling of the natural breeze; but the ability to generate 282 watts from a surface 60 feet in diameter is a breakthrough, and even if the beach umbrella form doesn’t catch on, the Sun-brella could easily be reconfigured to a porch shade, or even serve as a good power source for road side vendors. But for the tech-savvy consumer who won’t mind the high introductory prices usually associated with concept technology, the Sun-brella will turn out to be a nifty possession, especially for prolonged beach visits when wireless devices might need recharging.

Sun–brella: A hi-tech way to chill at the beach was last modified: August 6th, 2012 by admin

Ringing your sleep away with the Annoying...

The Miles, Metropolis and Moke chairs by...