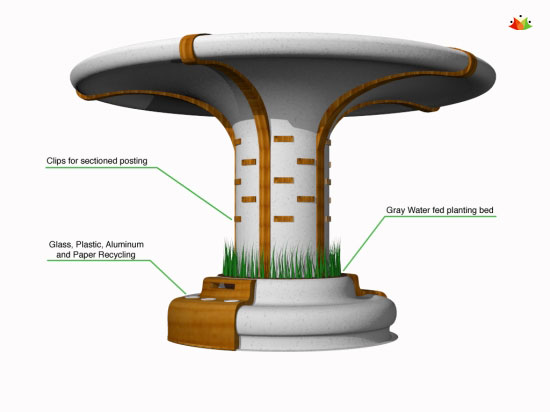 Green shelters are becoming the rage world over with more and more people coming along to save the environment from further damage. Here we have, one more such shelter which even doubles up as a bin and as a shady, pun not intended, place where you could rest your tired limbs and take a breather. This design, called the GreenU is the brainchild of, Andrew Lippe, a student at the Northern Michigan university. What Volpe has essentially done is, he has combined a waste bin, a recycler and a shelter all in a single, functional, eco friendly structure. For this, he has used readymix concrete moulds which are made of materials like fly ash. 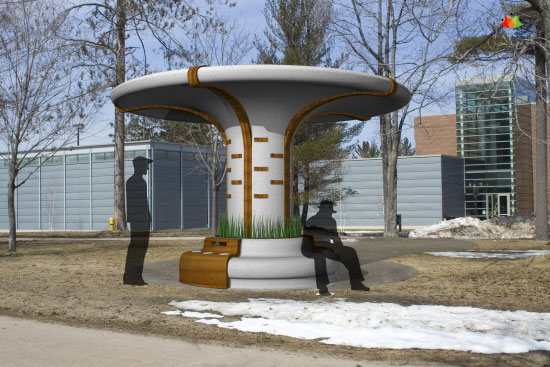 The structure in itself looks very chic with laminated bamboo abounding it. A recycler with three holes as inlets can be used to feed metal, paper, plastic and grass and an inlet for garbage. A seat all around the shelter will let you hang around with your friends although we don’t see too many students gathering around a waste bin. And the neat little Bamboo strips around the pillar of the structure can also serve as posting points. Now, Andrew has taken the green bit little too seriously and has even provisioned a space around the pillar which can be used to plant a few green plants that can be fed with waste water. Overall, a very functional eco friendly structure, except that sitting around the bin bit.

Virgin Oceanic to unlock the secrets of...

Ozzio transformable tables – Use them the...

Sub-T: A Subwoofer that is ready to...