An optical illusion so distorting, it gets you high 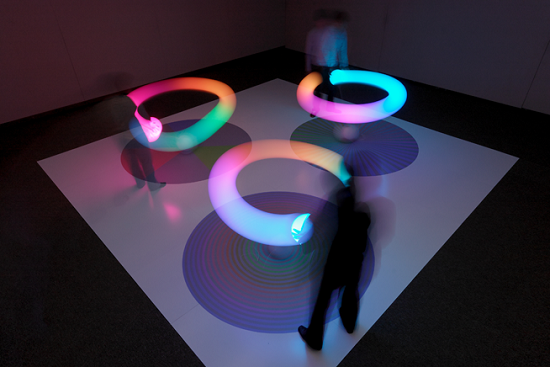 With a name as simple as Optical Tone, one would expect a simple device that is good at nothing more than spewing out random colors, but this creation of Japanese artist Mutoh Tsutomu is far from ordinary. The Optical Tone comes complete with its own color generating algorithm, and a complex system of sensors that detect the observers perspective and input and continually adjusts to enhance the ‘deception.’ The system adjusts the the brightness and hue of the perceived color spectrum to continually trick the observers visual perception. This way, the viewer cannot process the colors properly, and this hallucination induces some euphoria, which is similar to the feeling of consuming alcohol or drugs, but without any of the documented side effects. It is similar to being spun on a wheel and getting dizzy afterwards.

The exact specifications of how this distortion is achieved are complicated, but it sufficient to know that it incorporates a whole room, displaying stripes on the wall, and waist-high LED globes, which are spun into arcs. To enjoy the effects of the Optical Tone, one must visit the Skip City Visual Plaza in Japan, at least until the end of August. I’m guessing its already catching on there, and will enthrall numerous observers for a long time to come.

An optical illusion so distorting, it gets you high was last modified: August 6th, 2012 by admin

Extremis furniture for a great time with...

How to repair a leaky roof

End Table One: Squarish top on a...

Trash ball doubles as a football, any...

The Bass-Log subwoofer to enhance your music...

Morocco Mall is an extension of Casablanca’s...