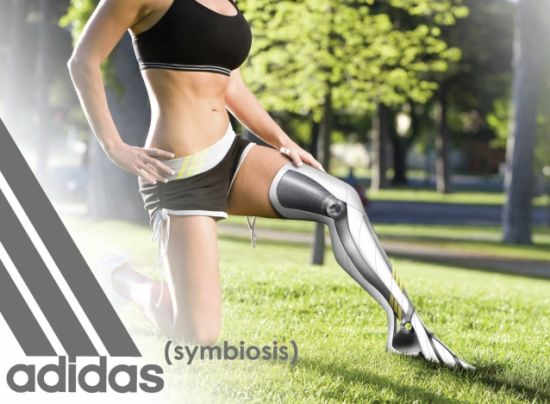 Despite extensive research in the field of prosthetics, users face certain problems with existing artificial limbs. Replacing the pistons, motors and struts with organic mechanisms, designer Randall Puzzitiello has come up with a new prosthetic concept dubbed the “Symbiosis” that helps the users perform their task in a more efficient manner. Developed for Adidas, the new aid not only improves the function of the leg but also the aesthetics, thanks to the sporty design.

Millions of people lose their limbs in road accidents and other causalities around the world. According to a survey, usually amputees neither like rubber flesh covered limbs, due to their unconvincing design, and nor the newer technology driven limbs, as they look too mechanical. Therefore, the new prosthetic limb is intended toward those who want it to look more like the human body and use the current technology as a sensible fashion.

Ironically, people with physical disabilities are considered a burden on the society in most parts of the world. Thus modern prosthetics becomes an integral factor to bring the life of amputees back to normalcy, as they not only add mobility to the users but also make them self-reliant, so they could feel and work like a normal human being.

Combining the organic aspects with the automatic, the Adidas Symbiosis gives both the human and mechanical touch to the user. Using the materials, such as carbon fiber, sorbothane, aluminum and electromagnetic steel, found in human body, the new prosthetic limb simulates the function more organically, if compared to its counterparts available on the market. Substituting the human muscles with electromagnets, the Symbiosis sends wireless signal to its lower section to allow natural movement, while an implant at the end guides the patient to control remaining nerves for effortless functioning.

Tap in for birdie cocktail table: The...

A knife holder that amalgamates art and...