Biowashball: Eco-friendly way to do the laundry! 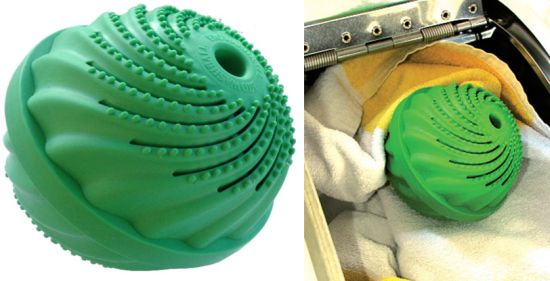 Economic and ecological, the Biowashball eliminates the use of detergents for washing clothes. All you need to do is to place it inside your washing machine along with your dirty laundry. The round thing is composed of natural ceramics contained in a plastic non-toxic sphere with only natural pigment, which make it 100 percent possible for recycling after the three year period. Compared to a normal washing process, the Biowashball reduces the risks associated with allergies to detergents and
eliminates microorganisms. It maintains the elasticity of the tissues and preserves the linen bleaching and oxidation caused by chlorine diluted in water. The powerful remote infrared rays emitted by Biowashball breaks the hydrogen molecule to water to boost the molecular movement, thereby increasing the washing power of water. It even eliminates pathogen germs in the water of your washing machine, giving clean and healthy linen. The eco concept can be recharged by placing it under sunlight for 2 hours. It saves you money while preserving the environment.

Biowashball: Eco-friendly way to do the laundry! was last modified: August 5th, 2012 by admin

Go electric while skating with Skataz

Wave Seating for the cars of the...