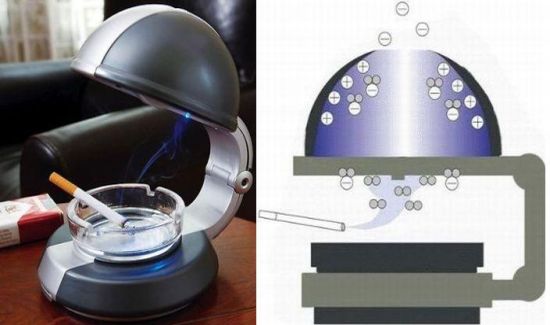 Introducing Neo-Tec’s Ionic Smokeless Ashtray, the world’s first ashtray that actually purifies cigarette smoke as it leaves the cigarette! Made from Acrylonitrile butadiene styrene (ABS plastic), the eco-friendly ashtray work’s on the principle of ionization to remove the smoke. When the device is switched on, it breaks down smoke and other particulates into negatively charged ions using an ionizer. These particles are then captured by the positively charged dome thus purifying the air. The Ionic Smokeless Ashtray is completely filter less which means there is no maintenance required with this unit and can be left on 24 hours/day, at only 10 cents a month, to not only rid your environment of cigarette odors but also of airborne dust, bacteria and many other harmful pollutants. It is 100% silent and runs on either 4 AA batteries or an AC adapter (included). And if that wasn’t enough, this little wonder has a built in flash light and comes with a stylish glass ashtray! All for just $28.00! Well, what are you waiting for? Go get it! Via: Bookofjoe

Elastico replaces the books with a universal...

Park your luxury car in the living...

Down to Earth Furniture!