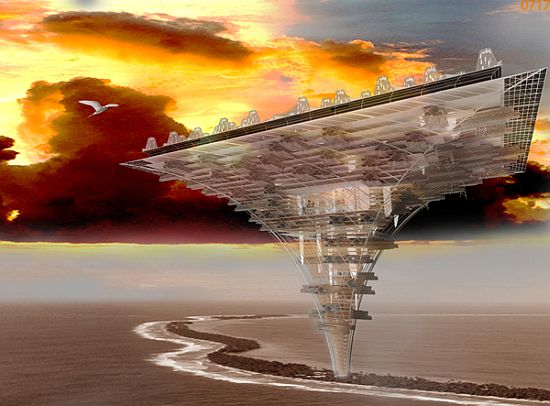 In the recent past global warming has emerged as one of the major predicaments threatening life on earth. Every year a large amount of land goes under water due to increasing temperature that melts glaciers to submerge coastal areas, forcing residents to move to higher places. Moreover, it causes frequent meltdown of glaciers that result in floods and other natural calamities worldwide.

How serious it is?

Due to rapid changes in weather conditions, nine islands of Tuvalu located in the Pacific Ocean are facing the fear of extinction in the coming decades, for 0.5-0.6 cm land of the islands is submerging in the water, thanks to the heavy flooding and elevated sea levels, every year. Designed by South Korean architect Jinman Choi and graduate student Ji Yong Shim, the “Emergency Land” is an elevated structure that featuring a number of skyscrapers on top will provide housing for 11,000 residents of the Tuvalu Islands, which may soon be submerged in the sea due to the rising water level.

The residents of Tuvalu Islands are facing serious migration issues, as Australia has not yet opened their borders to the migrants and New Zealand only permits 75 immigrants per year from the islands. Worried by migration problems of the residents of Tuvalu Islands, Choi and Shim want to develop a self-sustaining structure that could elevate the skyscrapers to reside the inhabitants safely high above the sea level. To balance the expanded mass of elevated land, the proposed structure features an “arch-designed core” and funnel-shaped platforms that when required can be recreated to expand the length and width of the area.

Building a floating city or structure above the water surface isn’t an easy task at all, for it not only requires a foolproof plan but also substantial resources to give wings to pioneering ideas. Same is the case with the proposed structure of Tuvalu Islands, as the massive production cost of the Emergency Land may delay or eventually cast off the ambitious project. Furthermore, safety measures and energy requirements are other issues that need extensive research, planning and execution to ensure a secure and sustainable dwelling for the residents.

The “Underwater City” in Bulgaria is a similar revolutionary town that is “built in the middle of a lake, not on an island, but actually below water level.” Though the city isn’t fully under water, a huge dam (1,377 feet in diameter and 65 in height) around the city, will keep the water away from the living area that can be accessed only through water transportation.

Floating Aerohotel by Alexander Asadov is a marvelous architectural design that will be a landmark for the floating structures of the future. Featuring a 200-meter-wide central body sitting on various beams, resembling a bicycle wheel with supporting arms, the Aerohotel will enclose cafes, restaurants and winter gardens, alongside the key hotel.

Proposed as a “Floating Ecopolis for Climate Refugees,” the Lilypad can house about 50,000 inhabitants. The stunning retreat seeks a place for itself in the year 2100 when half the world’s existing shorelines have disappeared due to rising sea levels.

Anywhere but Dubai, the idea of building a luxury hotel 66 feet underwater would sound far-fetched. But next to the Burj-al-arab, the rotating skyscraper, manufactured islands and indoor ski slopes of the desert commerce capital, the Hydropolis will fit right in. At a rough cost of UK£300 million, this jaw-dropping engineering challenge will allow guests to get a true taste for the peace and beauty of underwater life – and at a projected pricetag of up to USD$5500 per night for a room, you’d certainly be hoping that life is much better down where it’s wetter.

AZ Island is a concept of an artificial island that’s capable of movement out at sea. AZ Island is the brainchild of Jean-Philippe Zoppini, who is working in conjunction with the company Alstom Marine to realize his dream. The man-made floating wonder is huge in proportions. If conceived, it will measure 400m X 300m, which is capable enough to house 10,000 passengers simultaneously on its surface.