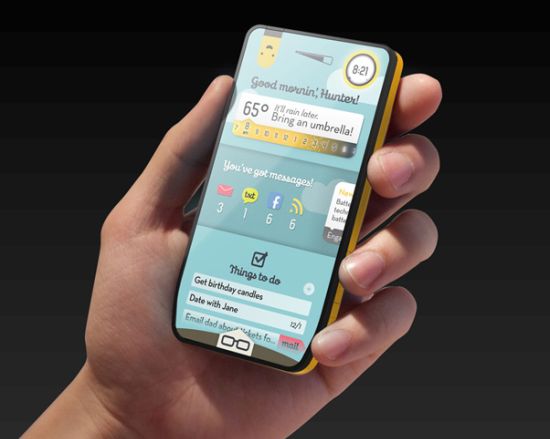 With majority of cellphone users looking for multiple functions in mobile handsets, the focus of smartphone designers has been shifting toward touch-sensitive phones that can meet communication as well as multimedia needs through a single device. The popularity of touch-sensitive handsets can well be measured with the fact that over 20 different touchscreen-enabled phones, though with diverse form and functions, have been released in past two years. Taking the mobile phone technology, evolving day after day, to a new level, designer Julius Tarng has come up with an innovative cellphone called the “Modai” that seems to forge emotional bonds between the user and electronic devices by persuading human behaviors and pushing the limits of mobile technology.

Despite the fact that numerous mobile phone concepts are switching to a touchscreen interface to provide great content and experience, they are still just chunks of metal and plastic that lack human qualities and emotional connection between the user and device. For most of the contemporary devices have no idea what you need, so you have to change your requirements according to the context you are in. Moreover, current devices are limited in ways, light, sound or vibration, to get your attention. These are either disruptive or ineffective, and hold no relation to the message that the user wants to convey. Therefore, Julius want to create a device that not only look good but also mold itself according to the needs and sentiments of the user.

What makes it so special?

Featuring a simple, ergonomic and unique design, the Modai offers a brilliant full screen, a muscle wire peel stand and sturdy aluminum body to allow superior communication wherever you go. Capable of following the user’s needs, the futuristic cellphone provides two paradigms, Fundai (social) that filters and delivers the social content and Prodai (work) that shows all the content you need to succeed in your professional endeavors, to balance both the social and work front. To add more, it includes a dynamic, human user interface, the Modai OS, which gives you exactly what you want anytime, anywhere. Furthermore, Modai proposes an area in the UI called the “Concierge” that delivers contextually relevant content based on previous usage and habits in different times and locations.

And the peel stand lets Modai move physically by itself, expanding the possibilities of tangible interaction with the user. The graphical avatar of Modai visually represents its status, including the paradigm you’re in, in case you are on a phone call, and the battery life. Sounding the alarm at its apex, the device gets up slowly, to wake you up, which you can snooze by a slight tap on its face. Moreover, the cellphone lifts its face up, down or nudges you in the pocket to attract your attention toward the received text message, call or contextual suggestion. Integrating modular, upgradable internals, the Modai circumvents the problem of outdated technology, for the user can simply peel back the peel stand and pull the tab to release internals and add new flavor to the hardware with ease.

What’s in it for me?

Exploring an advanced user interface and industrial design of a mobile device, the Project Modai proposes different ways to humanize actions by following the interaction between the human beings, while modular internals ensures a friendly ecosystem between the user and the manufacturer. Besides, Modai attempts to lengthen and enhance the relationship between the user and device by forging an emotional connection.

The modular and emotional characteristics of Modai cellphone has paved the way for a new genre of gadgets, which is not only intuitive and versatile but also sensitive and expressive, bringing man and technology more closer to each other than ever before.

The Yas Hotel is a unique combo...