Tidal power, although not yet widely used, is one of the vast storehouses of energy that shows a great potential for future electricity generation. Harnessing the power of tides and waves, Irish designer Shane Molloy has come up with sustainable lighting that generates energy from the flow of tidal river and converts it into electricity to illuminate the quayside of the River Suir (Ireland) with renewable energy. Hailed as “FLOWLIGHT,” the dock light features an outer shell made in carbon fiber, together with exclusively designed water turbine blades, mounted on an outer rim, protected by a Sub-Floatation Housing Unit that also shields the blades from the rock-strewn river bed. In addition, the water turbine blades are designed to operate clockwise and counterclockwise with the flow of the river, so they could generate power during both the high tide and low tide.

Developed with a Tidal Drop Extension Arm that constantly extends and contracts according to the level of water in the river to keep the Sub-Floatation Housing Unit at an ideal depth below the water, the quayside street light generates mechanical energy from the Water Turbine Blades and converts it into electrical power, which can be stored in its battery unit that when required can be used to illuminate the LED strip lighting. As soon as the daylight fades away, the built-in light sensor switches the light on that spreads in a radius of 15 meters. 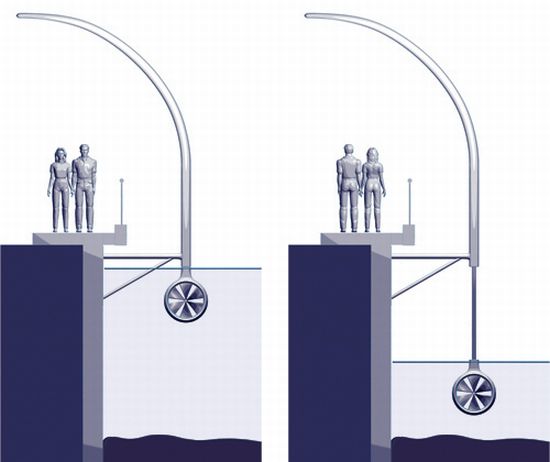 Fashionable and flexible Origami Side Tables

Hugo França: The Story of the Tree