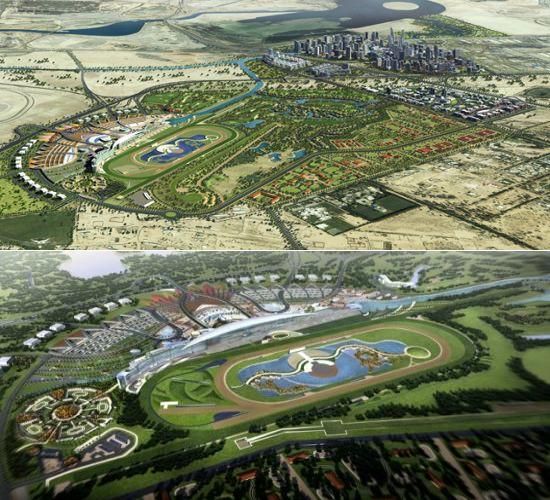 If you like your studs and enjoy seeing them racing ever so often then Dubai has to be on your definitive places to visit list. Meydan Racecourse being built in UAE’s capital is all set to be the world’s biggest racetrack. As a matter of fact, the venue is already being hailed as the future horse racing capital of the world. And the wonderful thing is that Meydan development is much more than just a race track for horses, being built as a part of the Meydan development is an entire city, and a business park. Meydan in Arabic refers to a meeting place where people come to discuss, compete and achieve. As a part of the iconic Meydan development in Dubai, the Meydan Racecourse is a vision of Sheikh Mohammed bin Rashid Al Maktoum. It will be spread over an area of no less than 76 million square feet. There’s a world class grandstand in the making that will span over a kilometer and boast of a seating capacity of up to 60,000 people. Also being built is state-of-the-art dirt and turf tracks.

As an extension of the racecourse, there are planned: a world-class hotel, more than 10 restaurants, a home for the Dubai Racing Club, a museum as well as a place to relocate Godlophin Gallery. Everything associated with the project is iconic; even the car parking will have a space for over 10,000 vehicles. In addition a four-kilometer canal will run from Dubai Creek right up to the racecourse. Construction is currently underway and the Meydan Racecourse is racing to open by 2010 Dubai World Cup. As a special event, the Dubai Racing Club has proposed a showcase event having prize money of $10 million. During off season, the venue will host concerts, conferences and functions to make greater use of the available facilities. The thing to do now is to start saving right away and make sure that you spend your vacations in 2010 at the world’s largest racecourse. Meydan Racecourse will be an iconic event and a must see for any horse racing aficionado. Afterall, it is the sport of kings! Don’t forget to check out the images in the gallery below.

Turn for the better: Kinetic sculpture that...