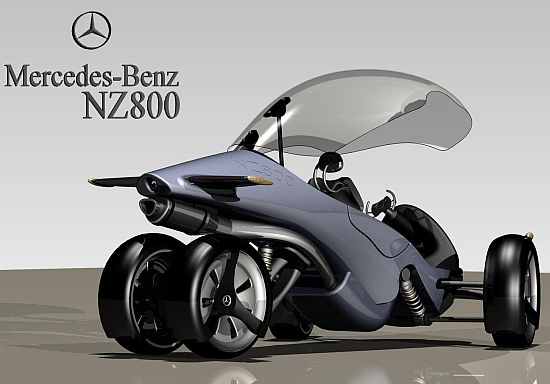 A full SolidWorks/ PhotoWorks based project, the Mercedes-Benz NZ800 design concept is a stunning single person vehicle that shows the way for futuristic transportation systems to optimize space and driver comfort. Designed around a bike engine, the concept is meant to deliver high performance while effectively emphasizing control and providing all-round vision to the driver. To give the front end more depth and character, the designer added a circular front intake which resulted in an inset chamber that resembles many other Merc concepts including ‘Vision Concept’, ‘F-400 Carving’, ‘Bionic Concept’ and even the SLK. The engine bay has been placed close to the ground below and behind the driver’s position to give off a better vertical weight distribution. A high def camera set between the rear light foils acts as a wing mirror giving the machine an overall appeal of a real futuristic vehicle.

DecaDeca takes your high-tech workspace on the...