Are architectures contending themselves just by making taller and more beautiful skyscrapers? No I tell you; they are looking to transform these hallmarks of modern cities to make them into sort of small cities in their own right. eVolo Architecture is a group of international architects who are determined to breathe a new life into the concept of skyscrapers – which of late has become a representation of all that is cold and fragmented in the urban environment. So the forum promotes a sort of annual skyscraper competition. Entries for 2008 are in and each of the designs seem too great to be realized. Symbiotic Interlock is a part of this diverse array of entries and this one comes from Daekwon Park. The concept is “towards the vertically interconnected city.” True to the description, the concept seeks to reunite the modern embellishments of the city with structures that imbibe life within. There are different networks that incorporate public space, greenery and nodes for the entire city. The structure is something that gives the semblance of something that is a natural outgrowth of the skyscrapers, something that’s living and feeding in a mutual relation to the tallest of buildings. Right out of sci-fi movies, the Symbiotic Interlock has docks, bridges, garden units, and its very own energy generating wind turbine units. It is an amazing vision and yet it is not that difficult to foresee somewhere in distant future. It is a bound for a time when natural spaces are all but extinct and the human contacts must be held in a very different environ from that of today. 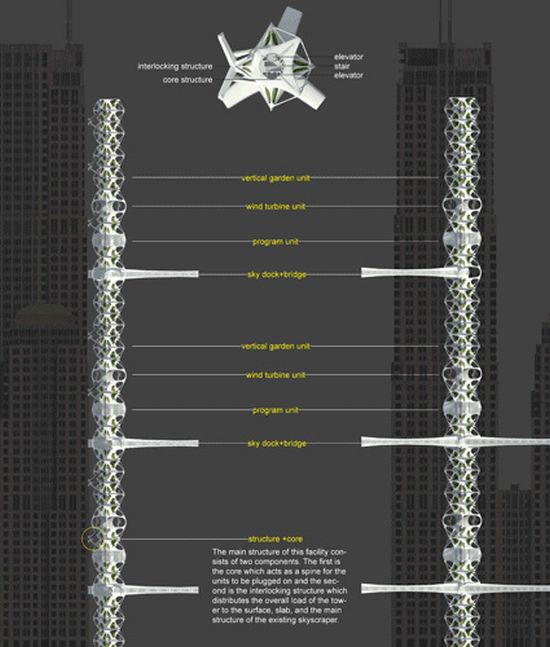 Growing Units to preserve and serve your...