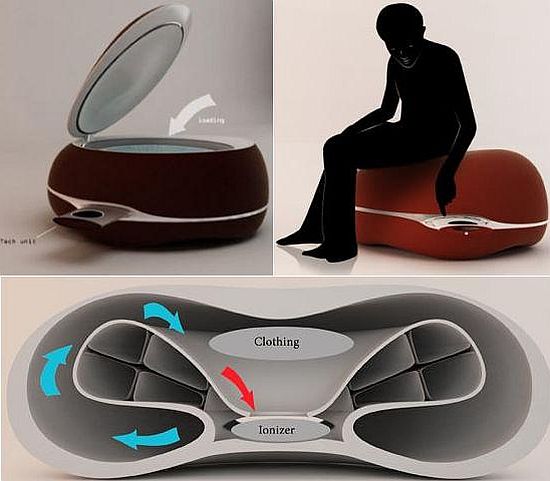 You know how many Hollywood movies show people falling in love doing their laundry at Laundromats? Well, New Delhi-based designer Harsha Vardhan perhaps took some inspiration from the socializing potential of the laundry ritual and used it as an inspiration for his Alternative Clothes Cleaner concept. The conceptual washing machine comes with two modes, active and passive, both of which let it doubles up as a large luxurious lounge seat. 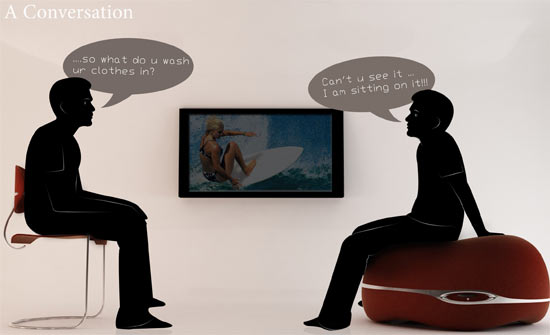 The best part is that the washing machine uses no detergent or water since its inner chamber acts as a pressure washer and cleans the clothes with ionized air. 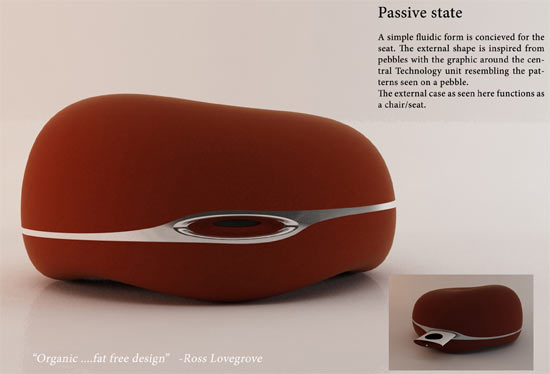 So you’re never stuck in a rather embarrassing situation where you invite your current flame to your “lounge” for a drink only to have the seats gushing out a whole lot of soapy, bubbly foam! 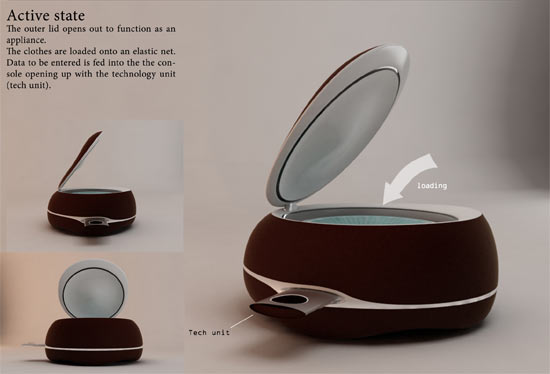 Here’s what the designer had to say about the magnificent design:

The design is of a Clothes cleaner which masquerades as a piece of furniture in the PASSIVE state and functions as an appliance when ACTIVE. The mechanism of cleaning is through ionized air, eliminating the usage of water and detergent. The usage is for daily clothing loads and was made for the user group of young professionals. 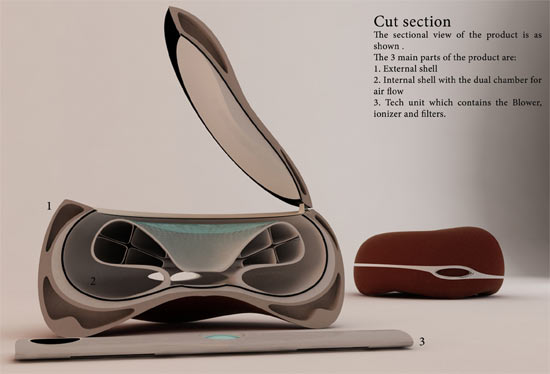 Only the user knows about the fact that the furniture piece is an appliance and thus the product easily blends into the surrounding environment. Thus the appliance mimics a household article when in passive use. The user loads the clothes in onto the net as shown in the image and upon closing the lid uses the Tech unit to enter data and set the ionizer fan to the blow mode. 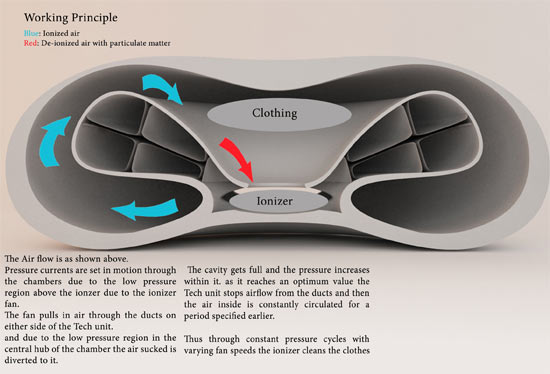 The product consists of three parts:
1. An External shell
2. An internal chambered shell
3. The tech unit

The external shell is of plastic with a foam packing. This is the part where the user interacts as a piece of furniture. The shell and foam take the loading and also absorb vibrations. 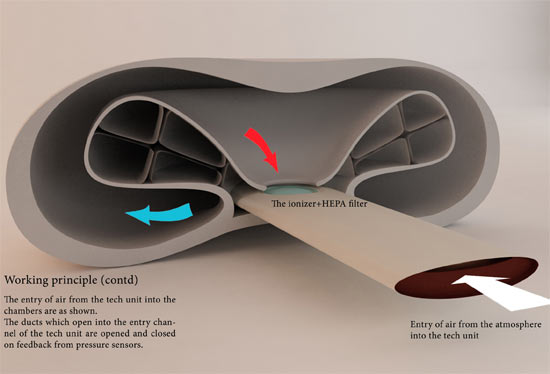 The internal chamber is where the flow of air happens. 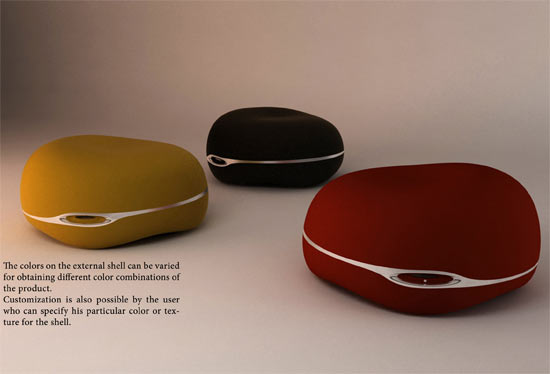 The product was made to the ELECTROLUX DESIGN LAB design competition’s brief which called for ‘Home appliances for the Internet generation’ which was essentially for young professionals.

I chose the topic of cleaning clothes among the 3 given. Initially extensive research was carried out with interviews and observations made as part of consumer study. Meanwhile alternate cleaning methods were also looked at which would enable the appliance to reduce water and detergent(a major pollutant) usage. 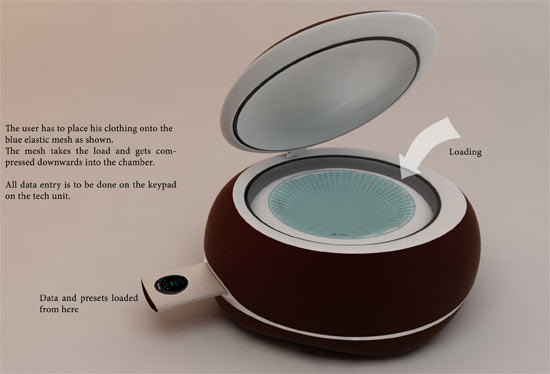 The aspect of mimicry in nature where an animal behaves as another was taken as an inspiration. Thus the idea where an appliance masquerades as a piece of furniture came about. The form is inspired from pebbles. 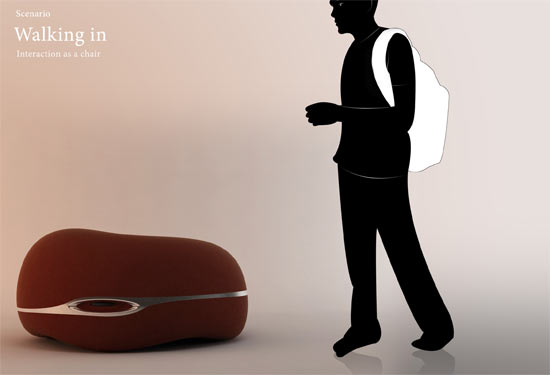 Ionized air was chosen as the cleaning medium where charged air molecules achieve cleaning action as they pass through the clothes. 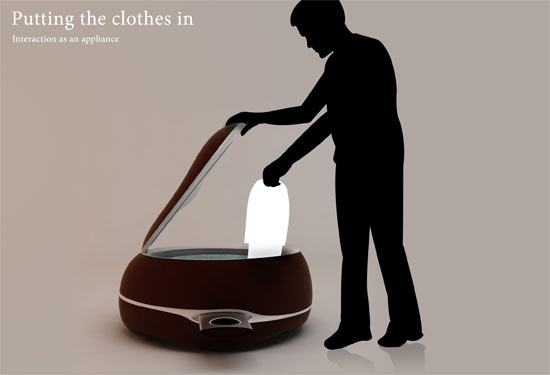 The charged particles attract dirt and grime and the accumulation becomes heavy and settles down, where they can be easily sucked out. This is a method used in cleaning clothing and equipment in hospitals, removing dust in rooms and also restoration of antique fabric.

Coroflot via Dvice via Gizmodo

Washing machine concept doubles up as lounge seat and lets you hang out with your laundry was last modified: August 6th, 2012 by DrPrem Jagyasi

Lounge on a bunch of twisted pig’s...

The Amazing Hover Lamp by Crealev