Apple Now Obtains Trademark for its Store Architect and Design

Giving heat to the ongoing debate about the intellectual property rights in the architecture and design world, Apple has recently obtained a new registered trademark certificate from the U.S Patent & Trademark authority in order to cover its architecture, which can be called as the biggest aesthetic asset of Apple. This is a trademark for the Distinctive Design & Layouts of Apple stores worldwide.

Apple Stores then & now:-First Apple store with the colour black and white was opened nine years ago in Virginia and now this theme of all mall centric retail locations of Apple is trademarked. The Apple store design has plain glass windows with steel panel frames which have a back lit Apple logo, stainless steel walls along with the stone floors and wood display tables are other elements of the famous distinctive Apple retail stores. This design has been mentioned as V2.0 interior in the documents applying for trademark.

All the apple stores have a plan of arranging tables symmetrically and same wall displays, which automatically triggers the name of the brand Apple. Apple has constantly made an effort for showing authorship to its products, logos and now aesthetics.

Why Trademark for store Designs:-Apple seems to have made this move after observing mimics to its store designs and even the products in China. However, the rules and regulations for prohibition of such acts have made some imitators to leave this fake trick to grasp on business. The report of registering its architect designs of stores by Apple has come immediately after a similar event  in China, where a well known architect Zaha Hadid has blamed a developer of imitating a design by Zaha. 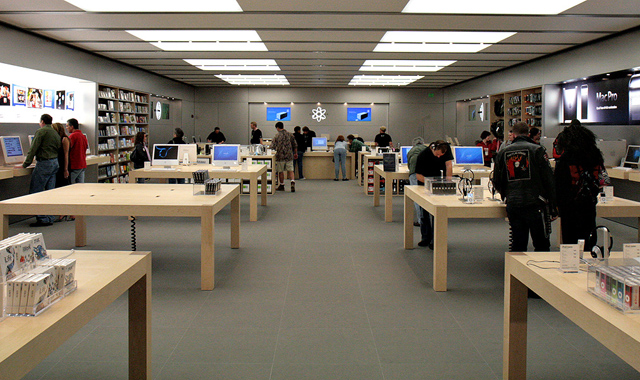 One may wonder what possibly has forced Apple to make such a move of preserving its architecture and design of its stores, but if we look at the past it is very obvious that the company has been very diligent about trade marking its designs. The testimony is the number of legal suits filed against HTC and Samsung for copying the design concepts initiated and introduced by Steve Jobs.

Apple’s possessiveness regarding the intellectual property rights of its designs makes it visible, how the company is worried about its aesthetic possessions which were triggered and developed by a small group of creative individuals.

Trademark on architecture designs by Apple has come after its legal battles over the tablet (rectangular touch-screen, which is said to be inspired by iPad) and the swiping motions for activating iPhone.

According to the apple news website, the U.S Patent and Trademark Office has taken almost three-year in reviewing the 850 pages documents presented by the company. However, this approval by the patent authority has come after the two rejections, one of which had mentioned that the architectural design of Apple’s retail stores is not innately distinctive and is very simple, which can be adopted and developed by anyone. However, later Apple has successfully presented supporting documents and materials, which could fetch them a trademark for the store design.

However it can also be argued that some of the features used by Apple for designing its stores are standard in the industry and there is nothing distinctive about them. But considering the competition by other big retail stores like Microsoft, the company has procured trademark for its design in order to remain distinct and identical.