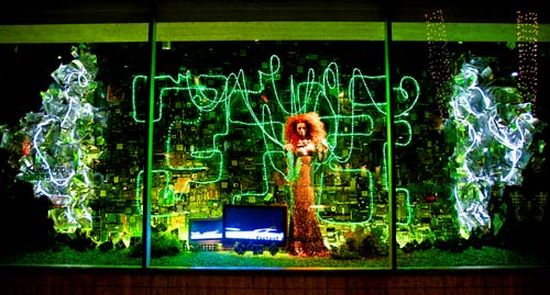 Window shopping is something one enjoys the most, specially one festive season is around the corner. But what if window dressing has something more to offer rather then just a mere display of the shop’s product. Cutting on that aspect of product debris display, window dressing now turns into an educational display with some of the Beverly Hills’ most luxurious stores serving as billboards for saving the planet. ‘Saks Fifth Avenue’ exudes harmony with blue-sky backgrounds, snowflakes and wearable clothes. ‘Nutcracker’ toy soldiers exhibits two human-size toys guarding a party girl in a festive red dress at Fred Segal in West Hollywood: three ‘Nutcracker’ kings have iPods attached to their ears with neon tubes at the Apple store in the Grove. While youthful melancholy rules at Ed Hardy, where resigned young women in jeans, tees sag around a giant Christmas package. Power dressing indeed!