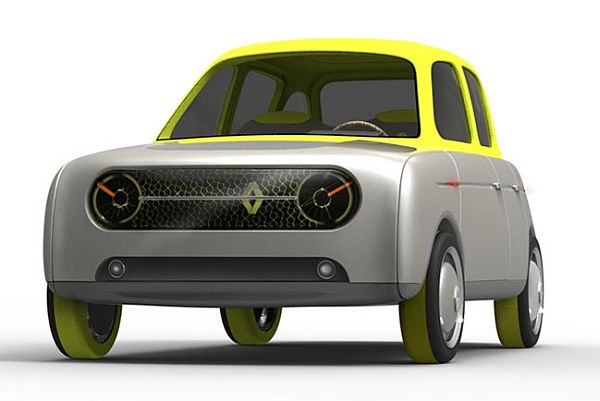 Fifty years ago, Renault crafted a classic masterpiece set to become the third bestselling vehicle in the automobile history. The car, popularly known as R4 (for Renault 4) or 4L, approached the world with a people-centered ideology. Known for its iconic pop-styled looks, superior functionality, state of the art technology (of that time) and fuel efficiency, this hatchback economy car was the first front wheel drive family car by Renault. And now after 50 years, Renault is all set to refurbish its ‘Little Wonder’ to bring back the marvels of that time. And leading the charge is American designer Allen Zadeh. In a bid to capture the hatchback’s historical essence, the designer has come up with an innovative design that is all set to woo the people again.

Back in 1960s when the car was launched by Renault, it captured the European market because of its design credentials, and a powerful 747cc engine of that time, making it a perfect subcompact family car. Its popularity landed it the opportunity of appearing in several films, like 102 Dalmatians, Laws of Attraction, Romancing the Stone, Let’s get Harry, Where Eskimos Live, etc. On top of that, its high torque and suspension and ground clearance also enhanced its sporting capabilities. However, in the early nineties, after reaching a stupendous distribution of 8,135,424 cars, the production died because of the problems pertaining to emissions, safety, outmoded production and rising competition.

Now years later, when the memories of this supermini were about to evaporate, Renault has sprung back in action at full throttle to give a face-lift to its ‘once-upon-a-time’ popular car. Out of the 3,200 designs (from 92 countries) that Renault received as a response to the design competition, it zeroed down on Allen Zadeh’s design. Working on the prerequisites Renault provided, Zadeh’s design reflects inventive design for affordable and sustainable mobility.

Named as ‘Eleve’, originating from a French word for ‘students’, it encompasses the flexibility element. The exterior panels are exchangeable, giving way to preferred construction which is easily modifiable. Zadeh, while working on this design has also kept ecological issues in mind. Apparently, out of all the conditions that Renault had put in front of the designers, one was an eco friendly approach towards the redesigning of the model. Keeping in mind the very same, Allen fabricated exterior panels made up of natural composites. Complementing the outer cosmetic composition, interiors too are prepared from recycled textiles.

Hammock finds a place inside with Hammock...

Ford Cobra snakehead concept is sure to...

House of Furniture Parts, a space within...