Although Jaguar will not confirm any production plans, the concept shows that the British brand finally is serious about playing in this segment. An engineering development SUV mule has recently been spotted testing near the company’s engineering center in England, suggesting that a production version could appear well within the next three years. Jaguar is also using the C-X17 to announce its new platform family, called iQ [Al]. Jaguar says that this new modular, lightweight and extremely stiff architecture will provide a high level of flexibility in design, packaging and production. The company also claims that this new generation of models will make lightweight aluminum technology more accessibly priced. 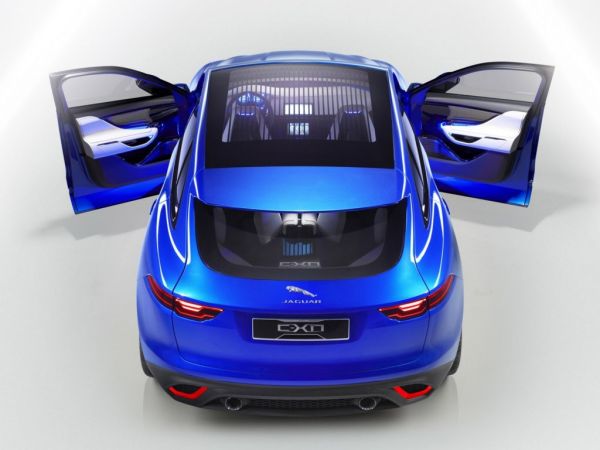 The Jaguar C-X17’s interior is the least production-viable element of the entire design, but it does give vital clues to the direction that design boss Ian Callum and his team are evaluating for the future. The focus is on clean, strong, flowing design, one that shuns clutter for pared-back simplicity.  Open the door and you’ll notice both the sense of space and the small F-type steering wheel and four individual bucket seats, the latter two elements suggesting a nimble, involving driving experience. This does not feel like the ‘command’ driving position so beloved of Land Rover owners. 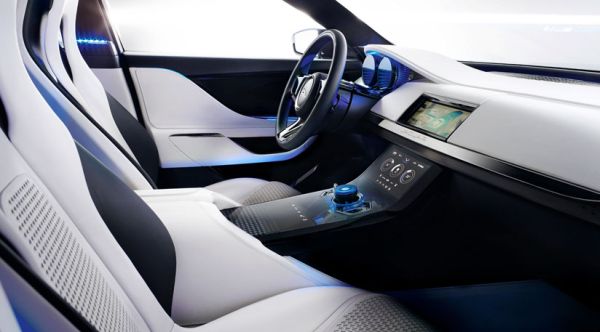 Sometimes seats can become complicated in concept design. The seat in C-X17 is E-type seat design. They’re lightweight, elegant, stylish, and we’ve used dog-tooth leather, which was associated with the glamorous US set in the 1950s and ’60s. Black-and-white is high impact without being too assertive. A thick, bold line running the width of the dash emphasizes space; the almost stark minimalism lifted by an abundance of piano black, saddle leather and restrained use of lighting. The first thing that you notice will be rotary gear controller  a development of today’s interface, glowing a seductive red, but then you notice that it contrasts with the more subtle but more ubiquitous –blue lighting that lends an urban, nocturnal kind of chic.

Lighting is another important aspect in concept design. It highlights fun and indulgence. You can only light so many areas of a car legally, but here you got it in the seats too. They want to have it in future Jags too. It will be offered with a new range of four-cylinder gasoline and diesel engines, currently under development for manufacture at Jaguar Land Rover’s new engine plant.