Apple is worth $560 billion because it knows how to sell them. It has stores in most states. In California it has nearly 60, including three each in San Francisco and Los Angeles. Apple management likely set the number and locations of its stores based on forecasts for years of extraordinary growth. Apple, as a matter of fact, is the only consumer electronics and smartphone company that has so many of its own locations.  On Saturday morning Apple’s newest retail store opened at the Stanford (Calif.) Shopping Center, revealing a brand new architecture and interior layout that simplifies and improves the visual appearance for passersby. All the usual elements were present at the Stanford (Calif.) Shopping Center on Saturday for the grand opening of Apple’s latest retail store. There was a waiting line of o almost 400 store enthusiasts, several top company executives, and some of the architects and designers who worked on the project. 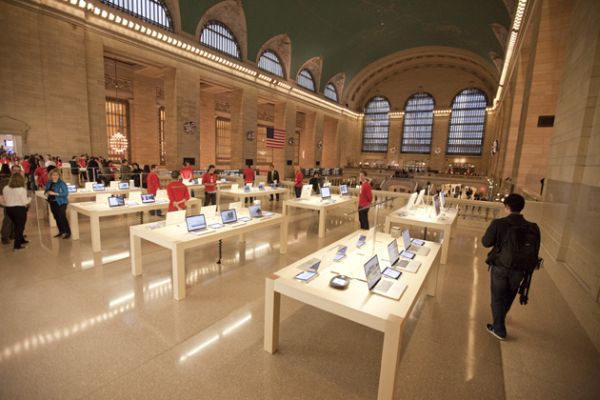 Looking Inside the New Apple Store

The store has an architectural design that wraps the storefront in tall glass panels, and hides half of the store behind a stone wall. The store replaces a mini-Apple store in the same mall that opened in 2004, under a plan to squeeze Apple into more locations. The new location also removes the tiny Apple store from the shadow of an enormous Microsoft store that opened nearby in the mall last year.

The 6,825 square-foot store is divided into two spaces: the front half displays all of Apple’s usual products on 12 wood tables, all visible through 20-foot tall windows on three sides. Walkways through the rear stone wall of this space lead to the other half of the store that sits under an arched skylight.  A stainless steel roof projects out from the storefront, providing sun protection and giving it a sanctuary-like appearance. A long Genius Bar in the center of the space allows 360-degree access for visitors, and accessory shelves line three walls. There are also tables and counters for training and product set-up, and two “kids” tables.

Stock rooms, offices and repair spaces are hidden away in a third area of the building. A roof covered in stainless steel projects out from the storefront, providing protection from the sun and giving the structure an airy appearance. According to planning documents, this new architecture will be re-used for future Apple stores in downtown Portland (Ore.) and Aix-en-Provence (France), both opening next year.