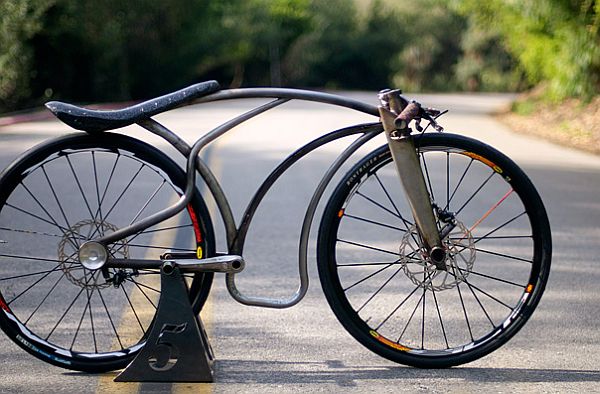 Bikes are getting an all new form every now and then. The competition faced in terms of designing a bike has increased many folds. People want whatever they own should be different and eye-appealing and at the same time should promise good performance. Jeff Tiedeken is out with the latest Gravity Bike which is bound to give you an adrenaline rush.

With an ability to touch a speed of 70mph, it is nothing but swift. Resembling a motorcycle is this bike, the only difference being it does not have an engine. The bike has been built out of 4130 steel and is very curvy. Jeff has welded the bike in a marvelous and creative manner, which is his signature style. This wavy design has a 26” Crossmax Lefty wheelset coupled with a pair of Avid Elixr hydraulic disc brakes that endow it with deceleration. Giving it a motorcycle-style footpeg struts appearance are a pair of swap and cranks positioned toward the back. Jeff had to display the Gravity Bike at NAHBS this year but he was not allowed entry. So, he further worked on the bike to make it look all the more nice-looking.