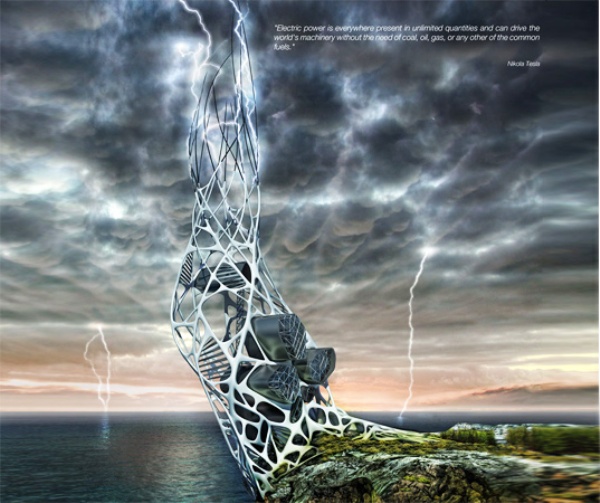 Hydra is the brain-work of Vuk Djordjevic, Milos Vlastic, Milica Stankovic, Ana Lazovic – who have put together their ideas to create a prodigy skyscraper in generating a sustainable form of electricity using hydrogen as their source. Their stupendous design won them an acknowledgment in the prestigious 2011 Evolo Skyscraper Competition. This vast energy resource has been fully exploited through the Hydra that harnesses hydrogen power through powerful lightning thereby causing electrolysis to pass through water molecules eventually bursting them into hydrogen and oxygen and then transporting the energy to its mega-sized batteries located in the base of the structure.

Hydrogen has been tagged as the next biggest source of energy that can be used in various segments – may it be for commercial, domestic transportation or industrial purposes. The energy would be produced by smashing an H2O molecule through electrolysis into hydrogen and oxygen and then storing it in batteries. This energy could then be transported via pipes and even trucks and cables. The most striking feature of producing hydrogen power would be the by–product – water vapor and heat that upon cooling would give us pure and clean water!

Hydra’s exoskeleton stands true to the fresh-water creature that inspired its form. It is in fact a twisted superstructure with a lightning spire at the top. The actual structure is built out of a very strong element of carbon called grapheme(graphite and carbon allotrope) that is two hundred times more durable than steel and has an excellent conductor of thermal energy and electricity.

The idea for the Hydra skyscraper is to harvest energy from lightning storms wherein the grapheme body of the structure would conduct the electricity and channelize it for storage in several mega-batteries located at the base. The project also includes a research facility, housing, and recreational areas for scientists and their families. The skyscraper is designed in a way that it not only performs its primary function of generating hydrogen-based energy but also provides a housing facility, research space and recreational areas to the scientists and their families!

The Hydra would be an apt structure for the tropics where 70% of the world’s thunderstorms occur and lightning is prevalent and countries like Venezuela, Central Florida (US), Singapore, Democratic Republic of Congo and Kifuka would benefit enormously from the Hydra.