Michael Williams, 41, road layer by profession in Essex has created a replica of the landmark London’s Tower Bridge out of an amazing amount of 1.6million matches after ten meticulous years of hard work and patience. This 6ft-long structure which once gleamed with 156 working lights had to be ripped off it when Williams’ brother saw smoke coming out of it. The replica now has two household bulbs lighting up the two towers and an illuminated 52 gun galleon underneath, lit up with long-life LED bulbs which last for 100,000 hours. Williams latest work is a result of his passion for historical structures which started gaining momentum after he created beautiful matchstick models of small boats and similar things. He now plans to sell the model to fund a studio and his next top secret project. 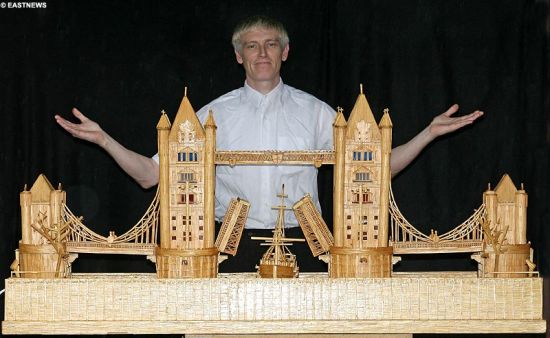 I never realised I was artistic until I started this. My teachers thought I was useless at art but they aren’t always right.

Camera for the visually impaired!