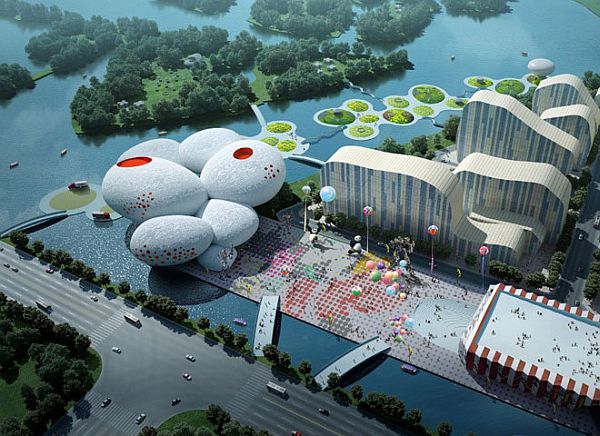 It’s worth giving a thought how quickly China has climbed the ladder of success. The Beijing National Stadium mesmerized the world with its architectural brilliance and dazzling fireworks. The latest in news is the upcoming Comic and Animation Museum in Hangzhou, China.

Popular Dutch studio MVRDV have won an international design competition conducted by the Hangzhou urban planning bureau to build a museum for Comic and Animation in Hangzhou, China. The winning design, referred to as the speech balloons, reveals eight giant balloon-shaped forms; each form intended to hold a different function in the museum. The idea behind referring it as the speech balloon is to highlight the museum as a place for cartoons, comics and animations.

Highlights of the design include two exhibition spaces to display cartoons, comics and animations; one of them being a permanent exhibition space, can be connected to three other auditoriums and a comic book library. Each balloon is interconnected and made to showcase different activities. Internal openings are designed where balloons touch each other to permit views amongst spaces. The design constitutes a series of parks set on islands intended to beautify the land surrounding the project. Part of the project includes a public plaza and a huge expo center. The project is estimated to commence in 2012 with a total budget of 92 million Euros.

Comics and Animations have a deep impact among youngsters. The Comic and Animation Museum will take it to the next level of developing it into a sophisticated art form. It creates a platform for people having similar ideologies and concepts to come together and share their knowledge and expertise. Thus, it brings together the world of art and entertainment to a common platform. The high-tech museum will be the new face of development for Comic and Animation programs.

Setra Coach combines all abilities of a...

Rocking chair from Inbal Dayagi – It...