Peugeot Plug: A car/communicator for the 22nd century metropolis 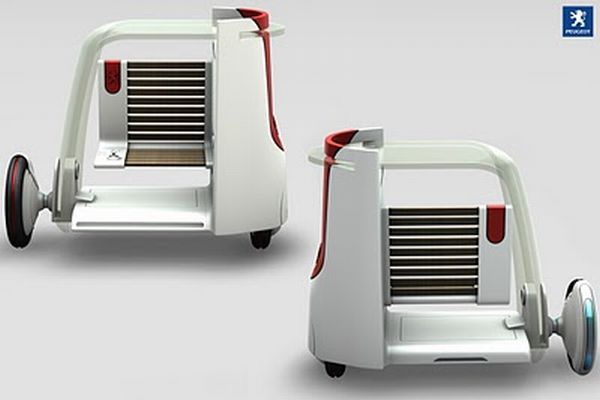 We at DesignBuzz come across a lot of really innovative, unconventional and basically “out there” concepts everyday and it’s kind of our job to take the good, the bad and the ugly in our stride. But to be honest, even we’re having a really hard time trying to make sense of this particular concept. The Peugeot Plug, from South Korean designer Minchul Kim, is a really tricky concept and we have no clue whether to file this one under “vehicles” or “communication devices.”

So why are we in such a catch-22 about a seemingly straightforward design? Well, to start with, the designer himself explains that “Peugeot” in this design has nothing to do with the famed car brand- it would rather refer to a bunch of communicators that can connect users via a shared community. Sounds simple enough, until you read on and you learn that the “Plug,” apparently the second half of the name of the design itself, would be used for personal mobility!

The designer explains that the Plug is intended mainly as a transportation system which would be run using solar energy and would rely on electric recharging stations called Plug-in, that would be made available exclusively to users of the Plug, i.e., the community that goes around in this mode of transportation. Although, we’re not really sure who will be responsible for putting these up (and paying for them!)

The concept further delves into the far future as it imagines a metropolitan city with a kick-butt auto-navigation system in place that would allow users of the Plug to navigate around the city via manual controls or an auto-pilot-like system built in the car(?) while the Peugeot service would allow communication within the community.

And if that didn’t sound like a scene out of a Hollywood Sci-Fi blockbuster, chew on this- the Peugeot Plug would also be geared up with artificial intelligence that would allow it to gather all the data about its user and make decisions for them (feel free to imagine it becoming something like the evil Skynet from the Terminator movies right about now!)

But before you imagine the worst-case-scenario and all kinds of doomsday hypotheses that could possibly result from fitting your car with artificial intelligence, do consider this- the designer intends the concept to be more than a mere decision-making/thinking car, it could also possibly be used as a bench or a streetlight in the otherwise boring landscape of the future cities. Yeah, that kind of makes us want to go, “Dude, whatever you’ve been smoking, I want in!” for sure.

Peugeot Plug: A car/communicator for the 22nd century metropolis was last modified: August 5th, 2012 by admin

Double fun: A desk that hides your...

A mirror embedded in driftwood

Personal Mobility Robot is a Segway for...

Get an all-new outdoor furnishing with the...