Based in London, United Kingdom, South Korean multimedia artist Soomi Park is no stranger to media fashions, interactive installations and the sheer range of mediums that her line of work generally uses. However, the artist has based most of her art on concepts that display a dialogue between the connections that humans have with their world. Using online and offline features to display emotional design of various types, the designer has created a new product called LED Eyelash which basically looks at the way Asian women respond to the desire to have larger eyes. 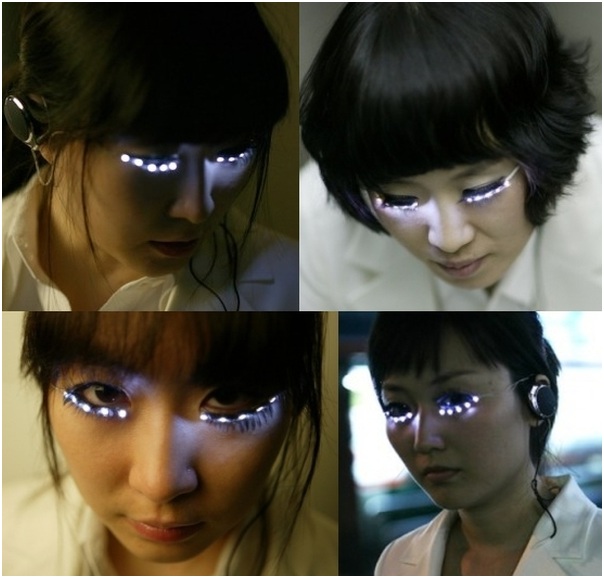 In Asia, women with larger eyes are generally considered more beautiful than women with smaller eyes though only a very small percentage of ladies in the region are born with naturally large eyes. This need has expressed itself in bizarre ways like cartoonish lenses that make eyes look bigger though many women have also undergone surgery to make their eyes look larger than they naturally are. This fetishistic obsession is the central point around which the designer’s LED Eyelash project revolves.

The product feature a mercury filled inclination sensor that can sense the movement of the eyelids and the pupils of the wearer. The sensors make the fake eyelashes flicker according to the movement of the wearer’s eyes and head. The glow from the LED lights allow the wearer’s eyes to look bigger from a distance though we’re not entirely sure people would notice how small or big one’s eyes are when they have a bunch of lights flashing around their peepers. Park claims that the LED Eyelash is as simple to put on as a pair of fake lashes and can be removed just as easily well. What park hasn’t disclosed however, is whether the lashed interfere with one’s vision and whether having strong lights so close to one’s eyes is safe or not.