Our idea of robots and their appearance is based on the sci-fi movies, books and comics. Technology has advanced considerably in the last few years and there has been a huge improvement and changes in the field of robotics. The days of the humongous and funny looking robots are over, as they are soon going to be replaced by the swift and smart swarming robots. This technology works on the basis of the simple logic of team work. Swarm robotics uses many small sized robots which work as a team and is very flexible. The large size of the robots used before made them quite inefficient. Swarming robots will be acting on commands given to them and their small size will help them move faster.

What is swarm robotics?

Swarm robotics is a technological technique of using multiple simple robots to work as a team and follow instructions. This technology has been greatly inspired by the nature. There are many animals, insects and fishes which live in a swarm. For example the ants, pigeons and bees all form a swarm for finding food or protecting themselves. They work in unison and have their unique ways of signaling and communicating with each other. The same principle is applied on the swarm robots. They are coordinated to help in moving objects or finding things. It is easier to get tasks done by the swarm robots as they can divide in groups and change the pattern of their swarm. 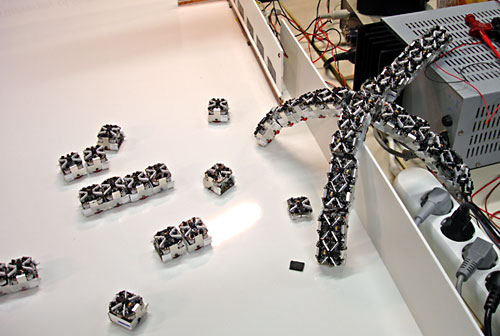 How can the swarm robots help mankind?

The possibilities of swarm robotics are immense. It is now being considered the future of robotic technology. Swarm robots will be able to serve humans in a host of different ways. Following are some of the ways how swarm robotics can help mankind.

Alone they do not amount to much, but together, they have the power to change the face of robotics in the coming years.