No matter whether we look at the architecture, art or music of the antiquity, it always shows us that in ancient times people had a deep attachment with nature. Their works took such a deep inspiration from mother nature that most of the buildings or antiquity are sustainable by default. Furthermore, these buildings conserve water, they are surrounded by trees and the best thing about them is that they can stand the test of time. No wonder we call them the greatest architectural wonders of ancient world.

Ancient constructions of the world are a symbol of the architectural brilliance of our predecessors. Their tools and technology were not as advanced as ours is today, but the imagination and strength of their structures are awe-inspiring. In addition, the designs, use of natural light, and the magnificence of the buildings are beyond imagination. Furthermore, even today, architects study these ancient architectural buildings to understand their complexities. 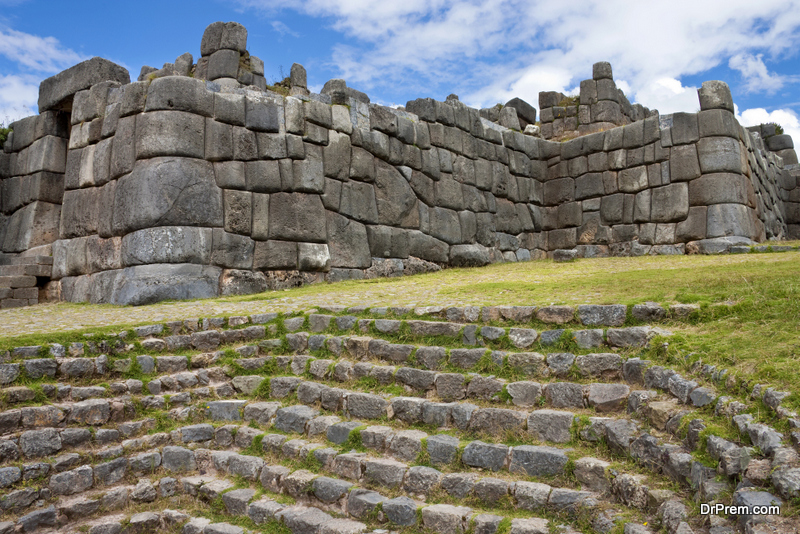 This inspiring architecture in the world is a walled fortress which is located in the city of Cusco. The huge monument is located at 3701 m altitude and is spread across thousands of acres of land. The structure was built by the Incas and is made of stones of various shapes and sizes. The biggest stone weighs at least 200 tons. In addition, the unique feature of this Greatest Architectural Wonders Of Ancient World is that the stones were cut and fitted perfectly without the use of any mortar.

This city in Rome is an archaeological wonder. It has many temples, courtyards, porticoes, and palatial stairways. The Romans and Greeks called the city Heliopolis or the ‘The City of the Sun’. 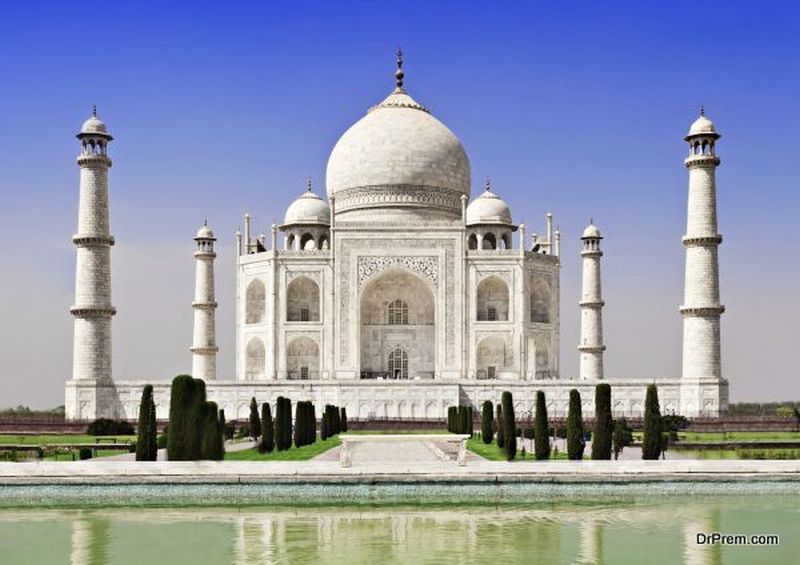 The Taj Mahal is unquestionably one of the Greatest Architectural Wonders Of Ancient World. It is one of the must-visit destinations for anyone coming to India.

It is one of the world’s beautiful architecture which hundreds of thousands of people visit every year to admire. It’s a tribute to love built by Shah Jahan, the Mughal Emperor, to commemorate his wife Mumtaz Mahal. The Taj Mahal represents Persian, Ottoman, Mughal, Indian, and Islamic architectural design. It consists mainly of the most beautiful white marble, sandstone, jade, and jasper. Furthermore, it was inlaid with semi-precious and precious stones. Moreover, the stunning monument also has many verses from the Holy Quran inscribed on it. The garden too is symbolic of the ‘paradise garden’. The same also has its mention in mystical Islamic texts.

The sheer beauty of the Greatest Architectural Wonders Of Ancient World, like this mosque in Iran is good enough to amaze anyone. It took 26 years to be built by the Safavid dynasty. Furthermore, the exterior is as beautiful as the interior. Most of the visitors coming here become speechless by the beauty of the colors, calligraphy, and various motifs thatare there within the architectural designs.

Colosseum comes by default no matter what roman tour package you choose. Built during the Roman Empire by Emperors Vespasian and Titus way back in 70 – 80 AD, coliseum is 159 ft tall, and was once used as a stage for fights between wild animals and gladiators. It had the capacity to seat 50,000-80,000 people with more than 80 entrances. Furthermore, it has many life size statues and the tiered seating arrangement was for people belonging to different classes – the top for lowest class citizens and ground floor for important ones. In addition, it also has an underground section. This section was initally built for gladiators and wild animals.

This is unquestionably one of the best architectural wonders of the world. It counts as one of the 7 wonders of the ancient world. It was built for Egypt’s pharaoh Khufu as his resting place. It’s one of Greatest Architectural Wonders Of Ancient World. Right now, we know very little about the construction method methods of the builders to quarrying and shaping the massive stones of the architecture. It was constructed between 2560 to 2540 BC, and is still standing tall. According to archeological research, the ancient architects used their knowledge of stars to design and plan the Giza pyramid. 2.3 million stones and 500,000 tons mortar were used to complete the pyramid. 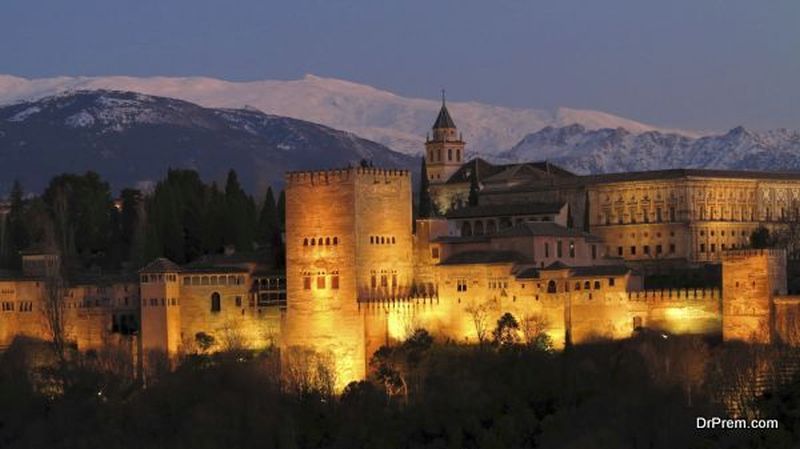 Greatest Architectural Wonders Of Ancient World has to include the Alhambra. More than 5,000 people visit the Alhambra every day. The beautiful structure is to be seen and admired and should be on the bucket list of all those who love beauty.

It’s also known as the Great Mosque, and was used as a mosque till 1236. Now, it is a catholic cathedral. Its extraordinary beauty can silence the most garrulous spectator. Moreover, the arches have candy-like stripes, which create a hallucinatory effect due to the play of light and shadow. In addition, it’s also one of the architectural wonders of the world which is a testimony to the talent of ancient architects. 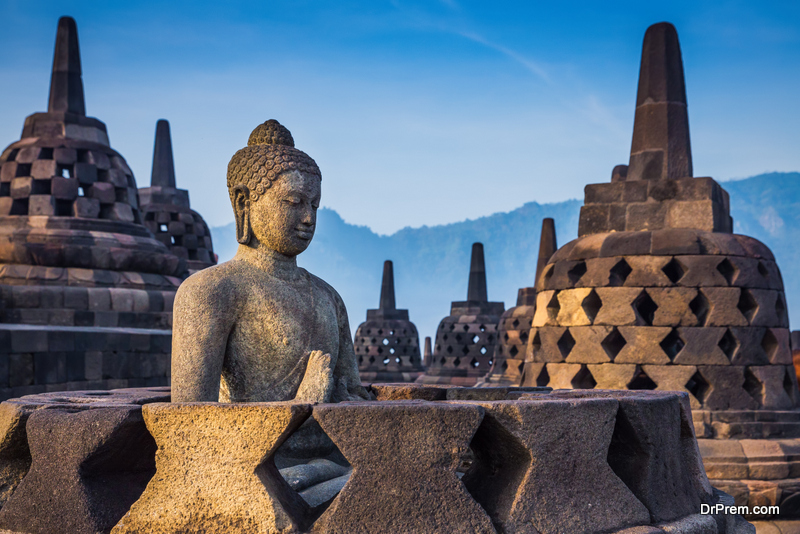 This Buddhist temple is a certified World Heritage Site. It’s one of the world’s beautiful architecture, which is impressive and built hundreds of years ago. The temple consists of 3 tiers, representing the Buddhist ideology of Arupadhatu, Rupadhatu, and Kamadhatu. Furthermore, it covers 1900 sq meters. The temple has a pyramid-like base, a cone-like structure at its center, and a stupa on top. The Greatest Architectural Wonders Of Ancient World, this temple dedicated to Lord Buddha- with 504 statues and 72 stupas attributed to him. No one knows who constructed the temple between the 8th and 9th century. It was hidden from sight until 1814. In addition, this inspiring architecture in the world is famous for the 100 water gutters that are therein the shape of a fish called ‘makara’.

The glittering royal palace – shimmering and dazzling – has beautiful decoration of colorful glass mosaics and gilt. It houses the holiest icon of Buddha in the country – the Emerald Buddha. The statue is dark green in color. According to archeological speculations, it had its origins in India. However, it was enshrined in the palace temple in 1782. Moreover, it is carved from a single jade stone, and the people of Thailand believe the statue is auspicious for the country. 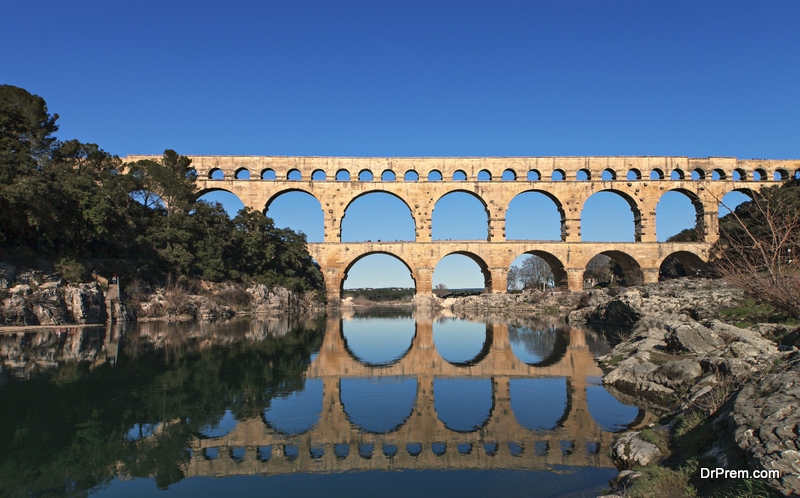 It is an ancient, 50 km long aqueduct bridge, over the Gardon river which flows through Southern France. The bridge is a masterpiece of Roman architecture. It was built in 1st century AD and has been extremely well preserved. Initially, it was used to deliver water from the Uzes commune to the province of Nimes in Rome. Moreover, it mostly consists of limestone (50,400 tons)  without using any mortar.

The temple built during the Chola dynasty outshines all other temples in Tamil Nadu, India. It is very gigantic building, and the highest point of the temple is 46m. Furthermore, the entire temple is full of decorative pieces showing deities, warriors, demons, maidens, sprites in brilliant colors.

The Greatest Architectural Wonders Of Ancient World are standing marvels to the designing and architectural talent of our forefathers. Furthermore, they used their imagination and local material to built magnificent structures which reveal their culture and aesthetic values.