What do you think about when you imagine the future of humanity? Don’t you imagine multi storeyed skyrocketing buildings too tall even to look at? Well, what if we told you in the future you would see floating structures in the sky. Unimaginable? Isn’t it. Take a look at these 15 wonders of the 21st Century man that might symbolize the future of our modern architecture.

15 Floating Structures staring in the face of the future

The pace with which world population is growing, combining with increasing water level of seas and oceans due to global warming, we sooner or later will have to discover some new places or find new ways to accommodate more people in the days to come. As one quandary gives way to some new solutions, floating structures have emerged as an innovative way out that will not just solve the issue of lessening land worldwide but also promises to offer a mesmerizing living experience to their residents. Here are some of the most interesting floating structures that fulfilling all the needs will turn out to be an abode for the residents.

Image Source : i2.wp.com/archaeologyinbulgaria.com
The ‘Underwater City’ in Bulgaria is a similar revolutionary town that is ‘built in the middle of a lake, not on an island, but actually below water level’. Though, the city isn’t fully under water, a huge dam (1,377 feet in diameter and 65 in height) around the city, will keep the water away from the living area that can be accessed only through water transportation. Read more 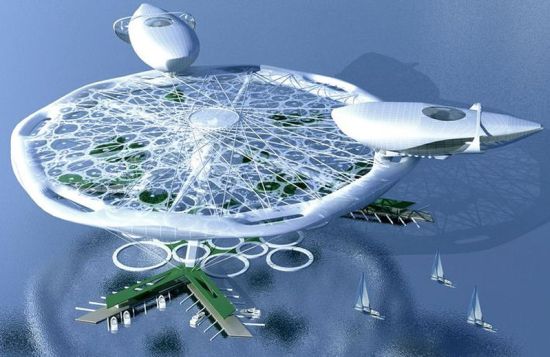 Floating Aerohotel by Alexander Asadov is a marvelous architectural design that will be a landmark for the floating structures of the future. Featuring the 200 meters wide central body sitting on various beams, resembling a bicycle wheel with supporting arms, the Aerohotel will enclose cafes, restaurants and winter gardens, alongside the key hotel. Read more 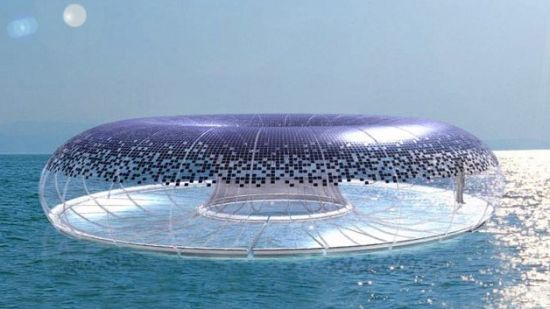 Inspired by the potential of the energy independence created by solar power, the Floating Houses project created by SolarLab conceptualizes a free floating habitat that can potentially extend the boundaries of existing living spaces. Read more 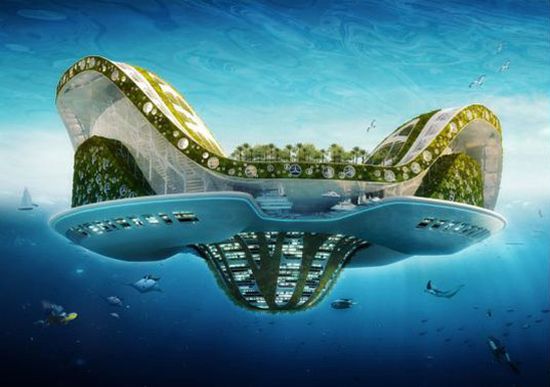 Proposed as a “Floating Ecopolis for Climate Refugees”, the Lilypad can house about 50,000 inhabitants. The stunning retreat seeks a place for itself in the year 2100 when half the world’s existing shorelines have disappeared due to raising sea level. Read more 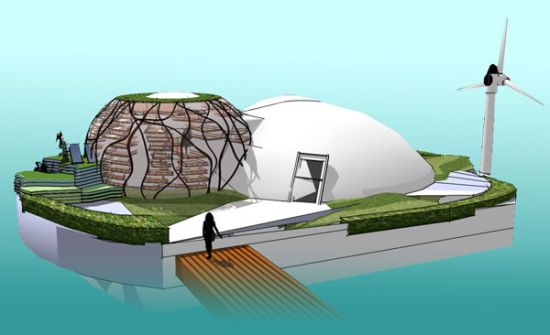 Waterpod floating house is a triple-domed island that will fulfill all its energy requirements from natural sources. Finished with recycled wood, metal, plastic, fabric and other materials, the Waterpod will support alternative energy and vertical agriculture irrigated by the purified water from the Hudson River. Read more 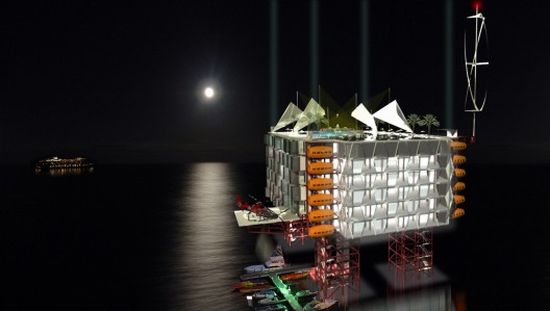 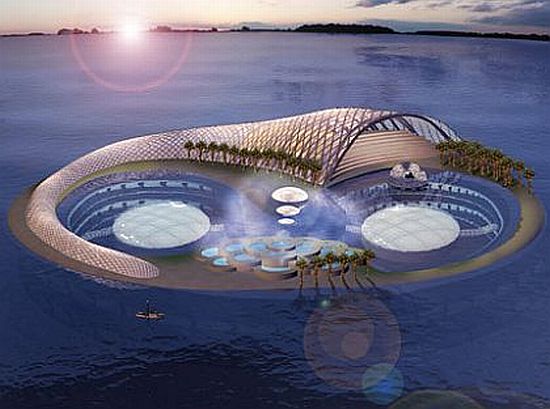 Anywhere but Dubai, the idea of building a luxury hotel 66 feet underwater would sound far-fetched. But next to the Burj-al-arab, the rotating skyscraper, manufactured islands and indoor ski slopes of the desert commerce capital, the Hydropolis will fit right in. At a rough cost of UK£300 million, this jaw-dropping engineering challenge will allow guests to get a true taste for the peace and beauty of underwater life – and at a projected pricetag of up to USD$5500 per night for a room, you’d certainly be hoping that life is much better down where it’s wetter. Read more

AZ Island is a concept of an artificial island that’s capable of movement out at sea. AZ Island is the brainchild of Jean-Philippe Zoppini, who is working in conjunction with the company Alstom Marine to realize his dream. The man-made floating wonder is huge in proportions. If conceived, it will measure 400m X 300m; capable enough to house 10,000 passengers simultaneously on its surface. Read more 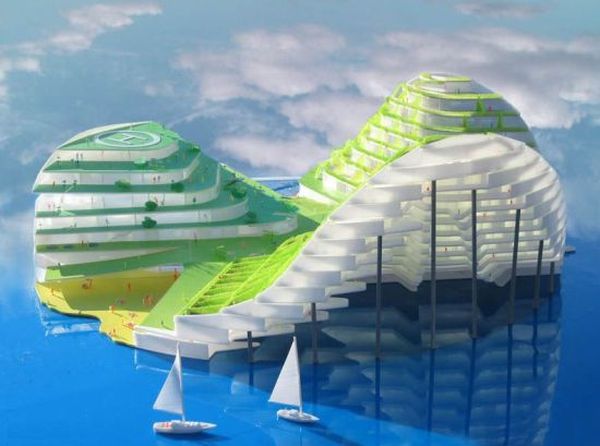 European firm, JDS Architects’ Mermaid building is in a way both ridiculous and incredibly thought-provoking. The renderings of the Mermaid show the building in every extreme biome on earth — from tropical islands to glacial surroundings. The building boasts terraces of greenery, a dolphinarium, hotel, and vacation properties. Is this just a glorified cruise ship? (With somewhat suspect structural support?) Or a new model for private development that truly is responsive to its aquatic surroundings? Read more 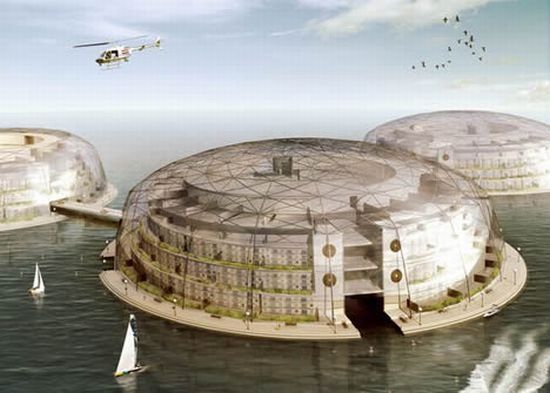 A team of Dutch designers recently revealed a plan to build a floating city on Shanghai’s Huangpu River. If built, the city will debut during World Expo Shanghai 2010. The floating city will have many green elements — it will use the water of the river for cooling and it the city will make use of renewable energy. Read more 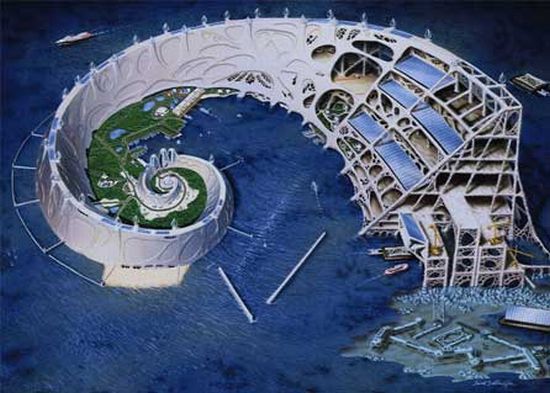 Wolf Hibertz wants to use the oceans as a future site for homes. The visionary designer has found a way to use sunlight to turn minerals in seawater into limestone. The limestone would be used to construct floating island homes. Autopia Ampere would begin as a series of wire-mesh armatures anchored on top a sea mountain. After it is place, they will be connected to a low-voltage direct current supplied by solar panels. Read more 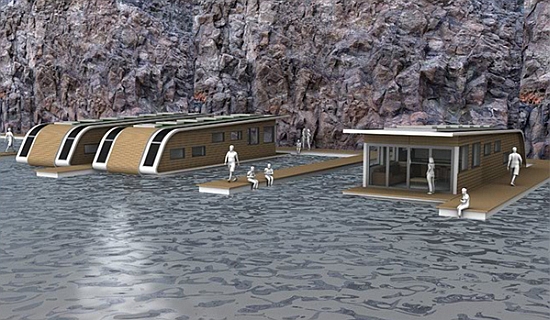 Dubbed the SolarHome, the 75m2 homes won’t be as spacious as the home you are currently living in, but will keep you floating on solar-power for a period of six to 12 months, before you’ll have to come back to shore for supplies. The design feature off-the-grid solar living while floating on water all through the year. The home can be operated in two modes – Docked Mode, which requires you to connect to the infrastructure for power and supplies and a Self-Sufficient Mode, which enables you to run off-the-grid for a year. Read more 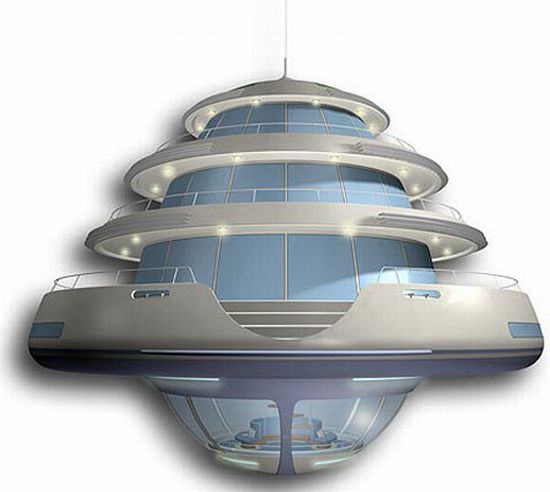 Bargain! Designed by Giancarlo Zema, the “Jelly-fish 45 Habitat” comprises five separate levels all connected by a snazzy spiral staircase. The floors are split into cheesy zone-titled areas including study, night, day, guest and viewing quarters. Though, if you purchase the floating mansion, you may abide by whichever nomenclature you wish. The viewpoint stretches 3m below the surface and looks jellyfish-like fantastic. The colossal seat-in-the-sea stands 10m high and 15m wide. Read more 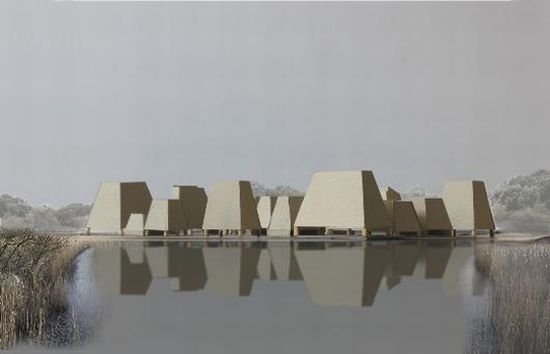 The design spectrum for green structures is really widening with growing global concern in energy saving and emission-free designs. This is no longer just a ecologically sound venture, but it makes even great economic sense as it attracts plenty of attention from both domestic and global media. Irrespective of the primary motive, it is still wonderful that the environment is benefiting from all this; even if that is by default. Read more

A 25 stories high floating hotel tower rotates 1 degree every minute. The floating foundation measures only 6 meter in depth. A fixed floating boulevard-ring connects the shore with the tower. The construction of steel and glass has been designed and engineered with well-known Dutch international maritime engineering companies, which results in a stable tower. Read more