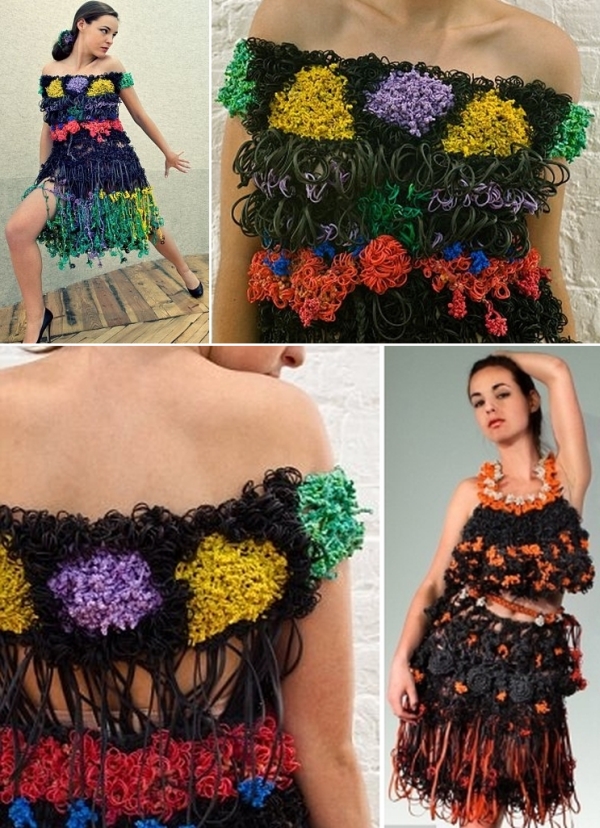 Architect designs dress made from 18,000 rubber bands that weighs 10 kgs

New York-based Margarita Mileva was born in Bulgaria and is an architect by profession. The 49 year old also has an immense passion for upcycling and fashion and she combined the two to create this stunning dress that is made from a staggering 18,000 rubber bands. Yup, you read that right, this incredible dress is made using the humble everyday stationary item and something that ends up in the trash more often than not. The designer says that she likes to think of her designs as conversation openers and felt that the unusual dresses are more like paintings made of rubber bands!

Each rubber band garment was made entirely by hand by twisting and knotting the elastic rubber bands together and Mileva spent more than 150 hours to create it. Weighing more than 10 kgs, the dress surely isn’t easy to wear, but the designer assures us that you definitely will not be risking being caught wearing something similar to anyone at any event. The unusual hobby came into being as Mileva’s love of collage making, knitting and making jewelry out of paper clips and rubber bands. For her, making a dress from the out of the ordinary materials was the next logical step in the evolution of her passion for her craft.

The designer uses prints inspired by the tattoos of the Maori, the spirit of Polynesia and even the famed German art school Bauhaus to create patterns in a variety of shades from rubber bands. The designer often enlists the help of her daughter Iva for her projects as well. For a design exhibition and competition in New Zealand, Mileva even made shoes matching the dresses. The designer has never worn any of her own creations but admits that the models seem to love them enough.

Top designs in handbags that are awesome

How to Choose the Perfect Urban Dancewear...

World’s 10 Strangest Pair of Shoes and...