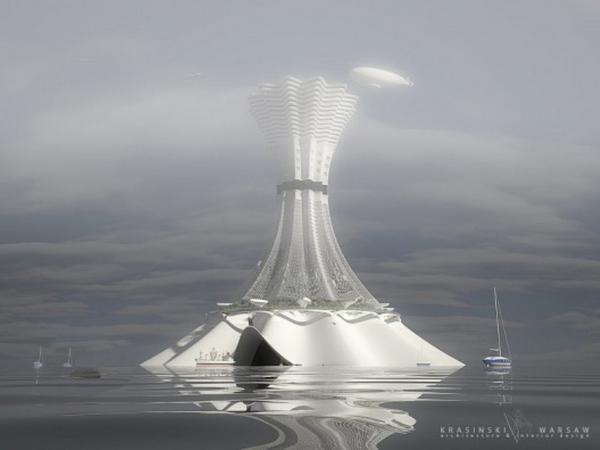 Man, using highly advanced architectural methods and technology, has created artificial islands, many of which are inhabited today. The idea of artificial island was born to solve the problem of increasing population on the face of the earth with quantity of natural landmass remaining the same. Architect Alexander Krasinski offers an amazing idea for an artificial island in the Persian Gulf, UAE, aimed with an aim to create a new state with its own government and economic policy. Designed keeping in mind the rising sea levels, architect Alexander Krasinski has envisaged this breathtaking creation as an answer to globalization and human impact on environment.

The artificial island is envisioned as a giant building. Set in the scales of the ocean floor, it will inhabit 52,096 people. The island will be equipped with ocean-going vessels dock, an airport, a garden at 100 meters above sea level, office spaces, administrative, governmental and academic centres, luxury residential apartments, recreational pavilions, sports facilities and terraces with Water Park. 1000 metres in diameter and equally tall, the island is expected to be an architectural marvel, much like its counterparts around the world.

Trimaran Yacht: The next face of Audi

China to acquire the world’s most sustainable...

Soundshelf: Speaker that doubles up as CD/DVD...

Tardiness can now be blamed on the...