Drones have been generating quite a bit of interest of late, what with many companies like Google and Amazon sketching plans for employing drones to deliver goods to customers. As such, it would only be fitting to expect quite a few of these high flying drones to make regular appearances in the skies. Here are 5 such drones we feel would surely hit the skies soon, if they are not there already that is.

Project Wing is an initiative by Google’s Moonshot Lab and is an autonomous drone that is intended to carry out specific delivery tasks. The test flight of the prototype was conducted in Australia where the team managed to deliver goods to farmers located across town. Google has hopes that they would be able to build a fully functional drone for mass deliveries in the near future.

Imagine buying something online and then having it delivered to you in just 30 minutes. That’s what Amazon intends to do in the near future. The computer has already tested a range of helicopter drones that would be a part of its Prime Air Program, available for prime customers. Following FAA approval, the company will start rolling out these drones in 2015.

This impressive wearable drone actually sits on your wrist just like a pretty bracelet when not in use. When operational, it transforms into a quadcopter and flies above the owner’s head. A small, rotating polaroid camera in the device’s body will take pictures of the owner from different overhead angles before the quadcopter returns back. 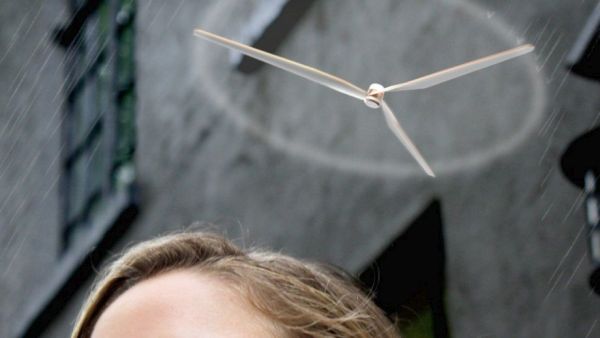 Debuted by Frog Design at the SXSW Interactive Stage, the Parasol is a conceptual wearable drone that acts as a weather protection device. Its classy golden cylindrical shape helps it pass off as a normal piece of jewelry that can be hooked onto a necklace or belt. The drone comes with a thermometer and humidity sensors to measure rain, snow, heat and even the solar rays. As soon as it detects an increase in any of these weather elements, it immediately takes off and transforms into a large disk that hovers over the owner’s head to protect him/her from these elements.

Renault recently revealed its latest KWID concept car which would come with its own built in drone. The quadcopter would be housed in the rotating portion of the vehicle’s rear roof and can be operated in either the automatic or manual mode. The drone can also be controlled via one’s tablet and has pre-programed GPS coordinates for smooth flying. When operational, the drone can take pictures, detect obstacles and even scout for traffic.

High flying drones are definitely not a thing of the future anymore. With Amazon and Google ready to start mass production of their prototype drones, it would only be a matter of time till we see the skies filled with these impressive gadgets.