Communicaid allows the hearing impaired to ‘see’ sounds around them 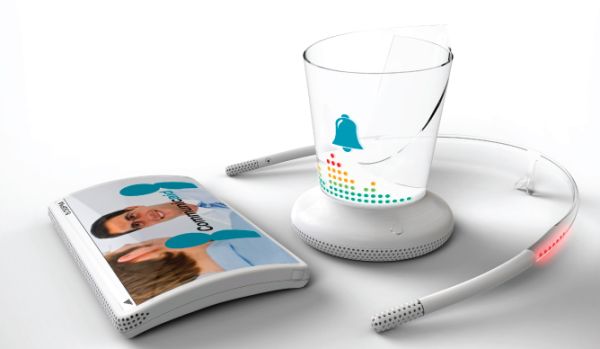 The Communicaid design concept from South Korean designer Jaepyung Lee stems from the disadvantages that the hearing impaired people encounter in the course of their daily routines. Unlike people with more obviously identifiable disabilities like blindness or a physical handicap, there isn’t a way to incorporate the hearing disabled into a hearing environment.

The most common problems that the deaf face, range from having to communicate with someone who doesn’t know sign language to the more terrifying scenarios when a deaf person cannot hear horns or other warnings on the road. A novel concept like Communicaid can really help in merging the hearing disabled population more seamlessly in the hearing world.

Communicaid basically is composed of three different communication devices that cater to various usage needs in different environments. The Communicaid Visual Sound Station is a small portable device intended mainly for indoor use, allowing the hearing impaired to recognize sounds.

The device features two integrated high quality MEMS microphones that are designed to capture specific sounds like a fire alarm, or someone calling out from a distance, or the doorbell and transfer them into a visual pattern onto the display as blinking lights and pictograms. This allows the deaf to be more aware of important sound-based social signals that they may encounter in their routine work or home environment.

The second concept from the series is a pair of glasses that can capture sounds and bring them to the wearer’s attention via blinking LEDs in a hair band style device. Intended for outdoor use, where a bulky sound station cannot be carried around, the Communicaid Glasses allow deaf people to become more aware of warning sounds and traffic on the street. The device is intended for use during outdoor activates like jogging, commuting, shopping, etc.

The third device in the series is a mobile communicator which converts conversation into text for the hearing impaired and also allows them to respond via a text on a screen or by choosing to convert the typed text into audio for the hearing person. The concept allows deaf people to communicate effectively to non-signers and serves as a great way to help them integrate themselves in the hearing/talking environment. The device features a curved slide-out display that can be read by the other person without straining his or her posture.

Communicaid allows the hearing impaired to ‘see’ sounds around them was last modified: August 5th, 2012 by admin

Vintage Bike Side Table for an auto...