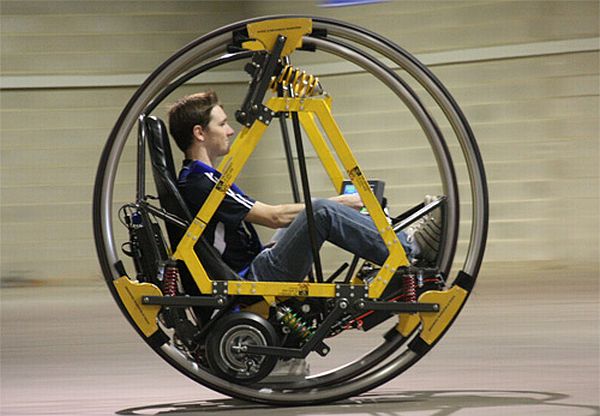 Mechanical engineering students at the University of Adelaide have succeeded in creating an electric Diwheel driven through a joystick. It’s called Edward (Electric Diwheel With Active Rotation Damping). Though it is designed traditionally with a frame and a suspension between the wheels, Edward is a step ahead than other diwheels in the past as it is completely electric. Moreover, because of its inbuilt dynamic lateral stability and the slosh control, gerbiling effect might be controlled; but, it is still in question.

It would be certainly fun to travel in such a vehicle that not only helps you to cover distances, but also gives you a joy ride. The diwheel has a special inversion control that allows you to drive upside down and its five point racing harness prevents the driver from falling out. For those who love to travel in a bicycle or an electric vehicle, Edward isn’t a bad option really. Even the speed of maximum 40 kph sounds fine. How much will it cost is currently unavailable, but sooner or later we can hope for a smooth and fun form of transportation.

EDWARD electric diwheel takes monowheels to the next level was last modified: August 5th, 2012 by admin

Arrow Toaster: The Mistral Toaster gets a...

‘Still A Clock By Night’ doubles as...

Happy texting for the challenged with B&D...

Chip Foose at the heart of the...

Projected Monitors: Is it end of days...