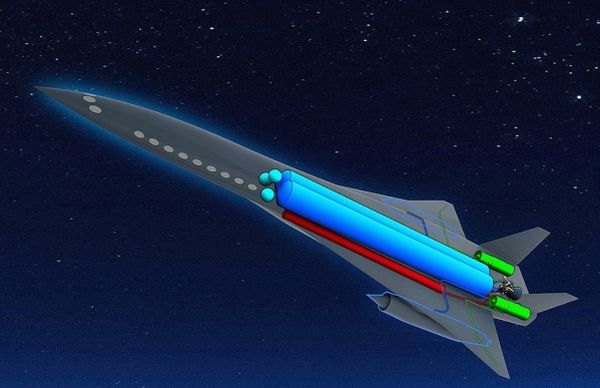 Blueprints for Zero Emission Hypersonic Transportation (ZEHST) were released in the Paris Air Show on June 20, 2011. This mechanical feat is to be virtually pollution-free and is able to carry about 100 passengers at a speed more than 3,125 mph i.e. almost four times the speed of sound. The jet will use three sets of engines to accomplish this speed. And most of all it will be powered by seaweeds or a composition of hydrogen and oxygen. The only emission this jet will release is water.

A dream project of EADS (European Aeronautic Defence and Space Company N.V) is foreseen as an successor to the legendary Concorde, which went into extinction in the year 2003 due to budget constraint and environmental concerns. This eco-friendly project proposes to be better than the Concorde ecologically and in the area of sound. It won’t produce the ‘sonic boom’, the noisy trademark of the latter.

A pair of rocket engines will be engaged by the pilot when the ZEHST reaches a suitable height to propel the jet above the atmosphere and later a set of engines called ramjets which are presently used in missiles will take the plane to altitudes of 20 miles. Conventional planes fly at six miles. Jean Botti, Innovation and Technology Director at EADS, says:

It is not a Concorde but it looks like a Concorde, showing that aerodynamics of 1960s were already very smart. The plane would fly just above the atmosphere i.e. it could fly at more than 3,000 mph .

The primary concern of aviation experts seems to be the limited capacity of the jet. “It is still very much a concept vehicle, but it is within capability. The technology is available. The real difficulty is the economics of making a completely new type of aircraft work. It will take billions to take it off the drawing board into the sky” says David Kaminski-Morrow, air transport editor at Flight International. “Will there be an appetite to build an aircraft that does not take an awful lot of passengers?” he adds doubtfully. Will the ZEHST achieve the same success as its parent Concorde? Only time will tell. We will just have to wait 40 years to find out.