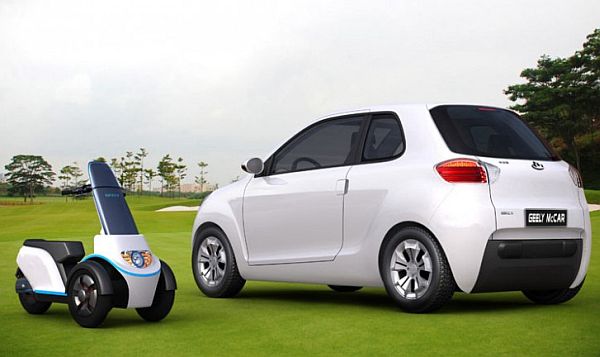 Geely, which is an automotive car manufacturer form China, has recently launched the Gleagle McCar concept at a mega ceremony held on Tuesday morning in Auto Shanghai. It truly is an amazing vehicle. McCar means magic car or motorcycle car, and it is a hybrid car paired with a scooter in the rear and is about 3.5 meters long. The four-seater mini city car blends the aesthetic of a car with the grace of a scooter while offering the maximum in driver flexibility. When you are stuck in traffic, you can just roll out the motorcycle, electric and foldable, from the back, which will help to create creating enough space for a wheelchair to park in.

Geely McCar comes in two powertrain choices: all-electric or plug-in hybrid. In order that the two vehicles can share battery power or be mutually re-charged (though the motorcycle apparently cannot store much energy), the powertrain of the car is integrated with that of the parked-in motorcycle. Furthermore, you can make the vehicle a four wheeler, as the charged, on-board motorcycle can propel the rear wheels of the car allowing you to enjoy the comforts of a four wheeler.

Geely McCar is equipped with a 12kWh battery version and takes with upto six hours for a full recharge. The car has a range of 93 miles, with a top speed of 52mph. Similar are the figures for the 8kWh plug-in hybrid, which travels around 31 miles on electric power and 373 miles on petrol and battery, with a top speed of 80mph and a recharge time of two hours. The scooter, which is parked in the Geely McCar travels with a speed of 18mph with a range of 18 miles, post which it requires a two-hour charge.
Chinese manufacturer and owner of Volvo says it is planning the mass production of electric and hybrid cars by the end of next year. Considering China’s threatening traffic and urban congestion, air pollution and population challenges, the Geely McCar is sure the car of the future and will be a sure hot seller in the Chinese market 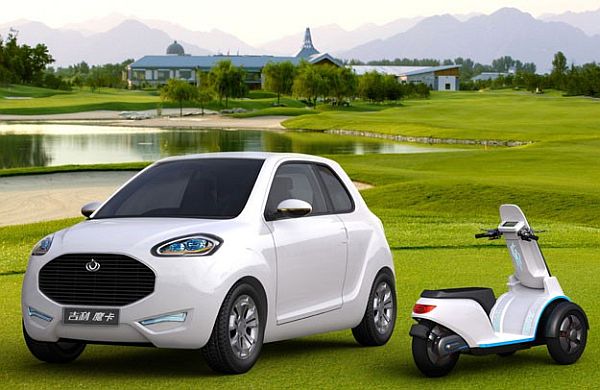