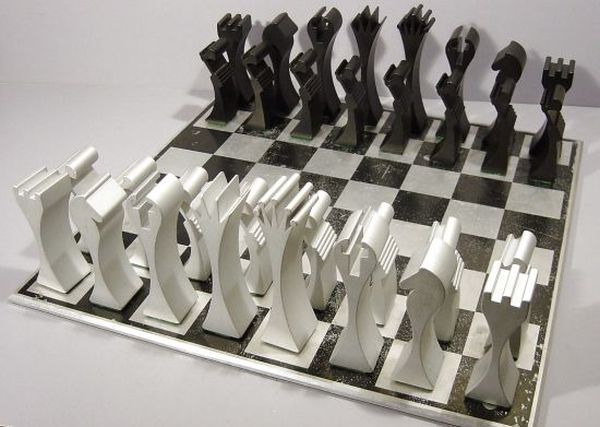 What comes to your mind when you think of a classy game? If it is chess, then you surely have a commendable taste. The thing that adds to the class of chess is a chess set. Forget about the old wooden chess sets, they are things of the past. Nowadays, you would easily find sets much more aesthetically appealing than them. Here, for example, this limited editions chess set made in extruded aluminum would surely blow anyone’s mind. You don’t really have to a lover of the game to admire these classic pieces of art. 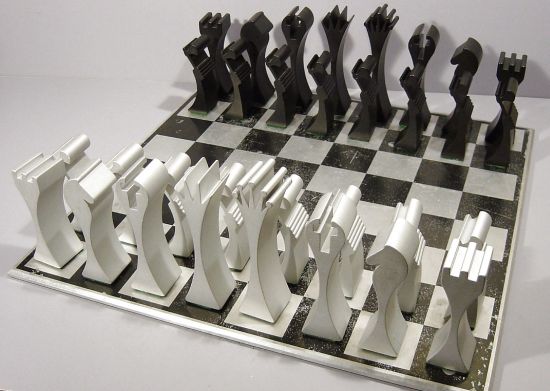 Created by the Columbia Aluminum Extrusion Group, the “Aluminum Chess Set” is a limited edition chess set produced for promotional purposes in the mid-1990s. Made in extruded aluminum, the chess set consists of 32 playing pieces vying for supremacy on the original aluminum chessboard. “The King measures an impressive 5″ tall with a 1 1/4″ square base, the Queen is 4 3/4″ tall, the Bishop is 4 3/8″ tall, the Knight is 4″ tall, the Rook is 3 5/8″ tall and each Pawn measures 3 3/8″ tall.” Priced at $850, the limited edition (about 200-300) chess set, together with all the pieces come with felt bottoms, giving a new dimension to the classical game. 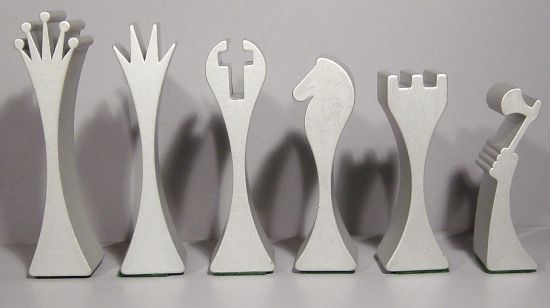 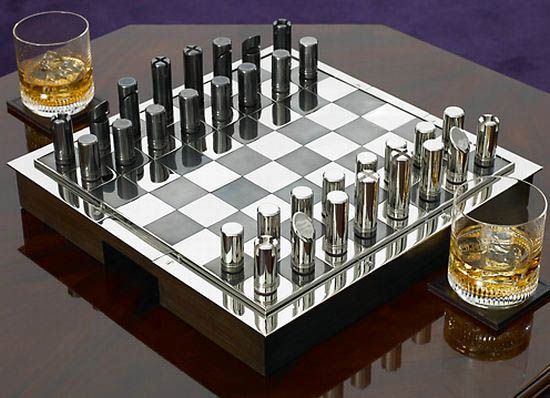 Chess entertaining the kings, knights and the higher gentry had been a royal game in earlier days. With this chess set designer Ralph Lauren revitalizes the majesty of the classic game. It is an ultra-exclusive chess set that presents a blackened nickel board to stage the royal armies. People also call this chess set as “Hammond,”. It features minimalist shiny, nickel-plated metal pieces waiting for your commands to take on the opposing army. The Hammond chess set also touts a leather base to store the pieces safely within after the brainy battle. 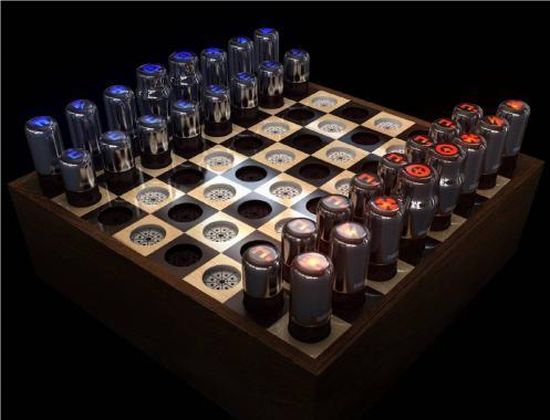 The classic game of chess may have been losing charm among gen-next, but designers are not leaving any stone unturned to keep the traditional game up with the Xbox 360 and the PlayStation. Reliving the classic board and pieces of chess, designer Paul Fryer is up there with a vacuum tube chess set called “Chess Set for Tesla” that will help in attracting the younger generation to the graceful game of chess. Finished with wood, glass and electric components, the Chess Set for Tesla includes pieces that light up when they are plugged in to the board, making the players vigilant in case the opponent adds or picks up a piece from the board. The limited edition (only 7) chess set measures 17 x 48 x 50 cm and comes with 32 pieces ranging between 15 cm (tallest) and 10cm (smallest). 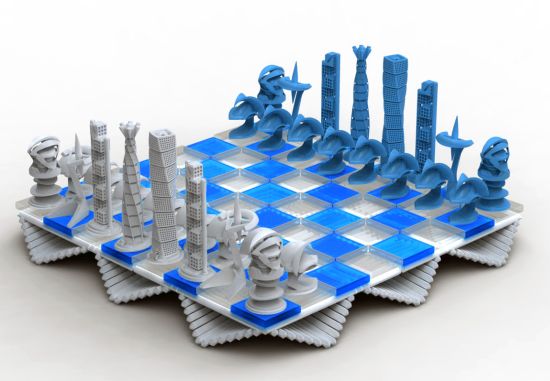 Drawing inspiration from architectural designs of Santiago Calatrava, designer Thomas Perrone, a student at the Art Institute of Philadelphia, has created an innovative chess set dubbed the “Calatrava Chess Set” that depicts the unique structures by the Spanish-born Architect as chess pieces, giving a new dimension to the classic game. Developed in collaboration with Jason Mouser, the chessboard resembles the Reggio Emilia Stationto accommodate the Tenerife Concert Hall in the form of Pawn, the Valencia Opera House as Rook, the Communications Tower as Knight, the 80 South Street Housing as Bishop, the Fordham Spire as Queen and the Turning Torso as King. The architectural details of these famous structures have been followed minutely to engrave them neatly on the pieces. Moreover, the architectural models influence the color pattern of the chessboard. 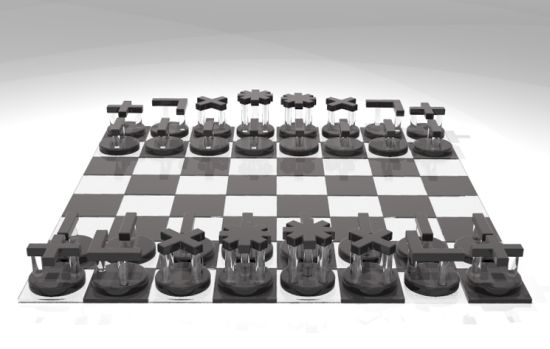 Chess is usually considered a mind game and requires a thought process on part of the players before making each move, therefore it takes a lot of effort and time to master the classical game. Inspired by the move of each chess piece, designer Reggie Wilson has come up with an innovative chess set that help novice chess players remember the moves better to master the game. Hailed as “Intuitive Chess Set,” the new chessboard includes the pieces indicating their line of action with their expressive heads.

The top and base of the chess pieces are made of Lucite (same material as the iPod). The pillars that separate the top and base of the pieces are made of glass, while the board is made of glass with a frosted checker pattern on the top side of the chess set. The underside of the board is painted black underneath the frosted checker pattern. The height of the pieces indicates their importance in the game. With the Intuitive Chess Set, chess will not remain a complicated game anymore.

5. Chess set made with nuts, bolts and tube bits

Besides gadgets, autos and furniture, chess sets offering great space for experimentation or innovation have emerged as one of the hot favorite themes for the contemporary designers. After witnessing some of the most unusual chess sets in the past, it’s time for yet another custom made chess set by Eric Claverie that presenting an innovative design will take you by wonder. Made of several metal parts, including tubes, bolts and nuts, the chess set by the French designer takes an artistic form, giving a new dimension to the classic game of chess. The chess board is carved out of small plates in brushed steel screwed on a wooden board. The king, measuring 15 cm in height, together with queen wears a crown assembled with pieces of brass bushings or nuts plumbing. 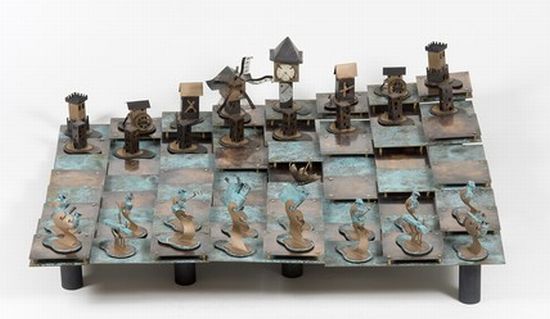 Chess sets have no longer remained the battlefield of black and white warriors. Furthermore, they are about to take giant. They would soon be paving their way away from the regular look. Taking a leaf out of the trend, here is yet another Chess Board and set. It is a creation by Mellington Cartwright. He completed it in alliance with Tim Yates. It is born out of the desire for stability and for the travel freaks. This chess board harmonizes balance between stability and instability. Standing 2 ft. by 2 ft at 6 inches tall, the board consists of over 100 hand-cut, hand-measured, rivets and washers. Apart from these, it also consists of 15 different Tetris-like shapes of commercial bronze.

7. Chess Set inspired by through the looking glass 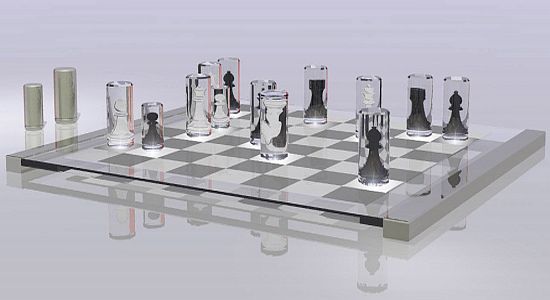 This chess set has for its basis the children’s book Through the Looking-Glass. It is the creative child of designer Yasmin Sethi. In this design, Sethi literally mimics the magical properties of its fictional inspiration. In the novel, Alice falls through a mirror and becomes a piece in a game of chess on the other side. Drawing on this fascinating image, the chess set too features pieces with an opaque mirror finish. These turn transparent and reveal their identity only when in contact with the board. Otherwise, they remain opaque. 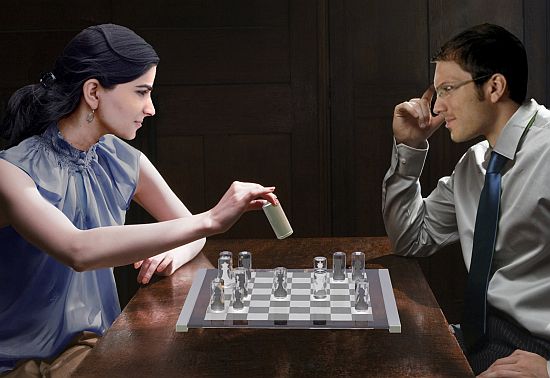 This may look childish enough. However, the chess set actually reveals a much graver layer of philosophy. It dictates that a chess piece has no value unless it is in play on the board. This of course is a stark comment on the materialistic mindset of the society in general.