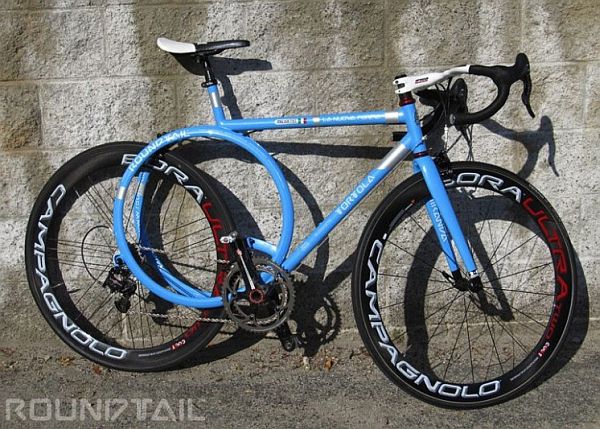 Many of us cycling enthusiasts had felt that sudden yet excruciating convulsion when spurting through a pebbled street or zooming over a pothole with our ever trusty bikes. Now that haunting situation could certainly be a thing of the past. Especially when we consider this unique, radical and rather adroitly conceived contraption by Canadian cyclist Lou Tortola. Instead of the rear triangle consisting of straight seat stays, chain stays and a seat tube, the bike conveniently compliments this with two ‘hoops’ of shock-absorbing joined rings.

From the physical perspective, the hoops encompass a more extended length than the conventional setup of straight bars. The increased length and most importantly, the enhanced flexibility reduces the amount of vibrations transmitted from the roads or streets. Hence, in the process, it mitigates the shock energy.

Well, Tortola himself got the idea while watching his fellow bikers getting injured due to that sudden jerk. After numerous tests and experiments he convinced custom bike builder Paul Taylor to create a prototype RoundTail. This prototype was further tested in Colorado’s Microbac Laboratories, and they came up with positive results.

It was reportedly found to have ten times the vertical flex of a traditional frame, and over sixty times the shock absorption. The only negative attribute that could be associated with the bike would be its pedaling efficiency, specifically in relation to the extended shock absorbing gear; but even that could be nullified with improved mechanisms.

The prototype was officially shown at the San Diego Custom Bicycle Show last week. Though there has been no word on its pricing or availability, Tortola plans to have titanium, carbon fiber, mountain and hybrid versions of this convenient bike ready for the Interbike trade show in Las Vegas this September.