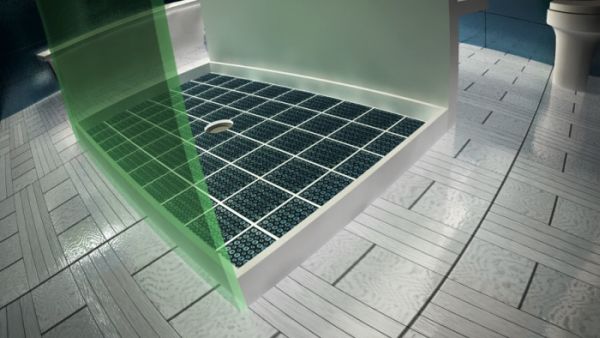 Minimalism may be the flavor of the month in luxury bathroom designs right now but there are times when concepts that promise to be no-fuss end up being the complete opposite of it. This supposedly simple bathroom design concept by Durban, SA-based designer Zahir Khan is one such example of minimalism going wrong. The designer originally had intended to give the bathroom a clean and uncluttered design, which he almost achieves but the design alas comes undone by the ill-use of space.

The design consists of a dedicated area for the bathtub, the shower, and the toilet, but fails to provide a vanity sink or any feasible storage within the bathroom itself. The shower unit stands smack in the middle of the bathroom with two passageways to either side of it which just does not make sense given that it adds to the floor space without adding anything to the bathroom functionally or even stylistically. The designer says that the shower was intentionally so positioned to give the user the option of walking around it or right through it to get to the bathtub but that just makes us wonder how many people on an average would ever want to have that option.

The shower unit also lacks two walls and doors, which in real life would translate into a wet floor. Now that can be a real injury hazard since there are not any handrails or walls for the user to hold onto when they step out of the shower.

The toilet is placed right next to the entrance, which may be convenient at times, but in the overall design of the bathroom, it looks isolated and sticks out like a sore thumb. Since most top-line sanitary ware designs these days look to make their products appear more relaxing and calming to the user, its placement at a desolate corner without any decor or add-ons cozying up its immediate space, has the effect that is exactly opposite to the one desired by manufacturers or users.

The lack of a dedicated vanity sink and storage cabinet, however, is something that just cannot be ignored. After all, brushing teeth and watching face and hands is not something people usually turn on the shower for. Had the designer included these elements into the design, the bathroom concept would possibly have appeared much more complete and wholesome than it is now.