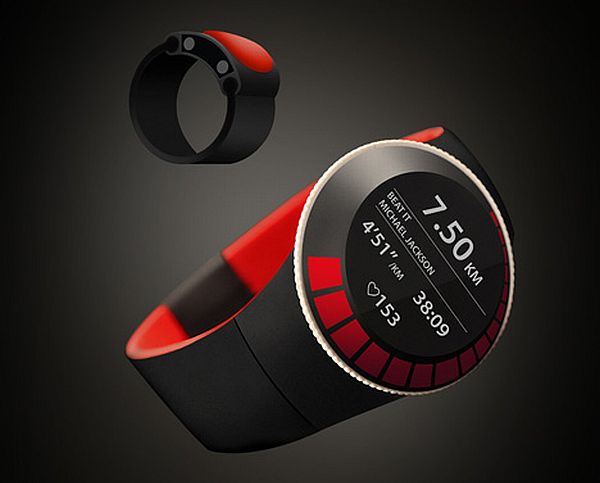 Adrien Guenette has created a strong source of motivation for those of us who find it difficult to exercise. One look at this spectacular gadget, and who would not want to wear it and flaunt it? But there is more to this sleek black and red watch like gadgets. On looking closer, you realise that apart from being a watch, it is in fact a new super gadget called a gesture-controlled music player, which has the potential to make all other players redundant.

Born out of the imagination of graduating senior, Guenette, it is his final project in his quest of graduating from Emily Carr University of Art & Design. So much has been packed into this gadget called “Beat”, that it can be best described as part iPod Nano with Nike+ and part Wiimote, in the form of a wristwatch and a ring.

It can, therefore, tell you a number of useful things, such as time, distance, pace and your heart rate, all in “real-time voice feedback.” Plus its integrated wristband USB is also a thoughtful addition.

Current devices on the market are difficult to use while on the go—finding the right button to press without stopping or struggling to use a touchscreen with sweaty hands. Using an innovative gesture interface, Beat seamlessly integrates into the running experience and puts you back in control.

If and when this cool gadget hits the market, users will surely say just one thing to all those other music players in the market, and that is: Just Beat it!

Decorating your home with alphabets!