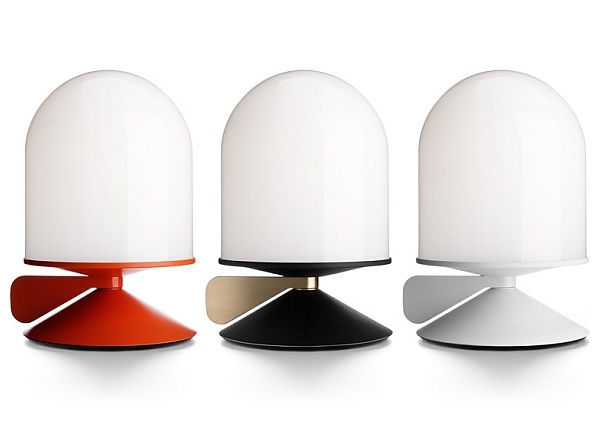 Known for its whimsical and playful pieces, Swedish design studio Note has created an uber fun new table lamp called the Vinge. The table lamp was crafted by the studio for Örsjö Belysning, a Swedish brand, and comes with a rotating, movable wing at its base that offsets the massive dome at the top. ‘Vinge’ is Swedish for ‘wing’ and the entire design of the lamp is spun around the wing that helps adjust the light of the lamp. The dome of the table lamp is made from translucent blown-glass lampshade that references mid-20th century designs.

As the brass wing located at the base of the lamp is rotated around a central axis through 180 degrees, the dome gradually becomes fully illuminated though users can stop it anywhere and between and allow the lamp to stay at a particular illumination point. The lamp is created using a super minimalist approach though it still encourages interaction and allows users to customize light according to their own needs. The Vinge Table Lamp is offered with a white and red base as well as a conical steel stand entirely in black. The brass wing offsets the design’s geometric and super sleep shape while highlight interactivity.

The studio hasn’t provided a lumens range for the light output of the lamp and they haven’t also specified whether the lamp would be usable with all kinds of bulbs or if it would require a particular kind of dimmable lighting to be fully effective. The unique and funky table lamp was displayed earlier this month during Stockholm Design Week at the exhibition space allotted to the Note Design Studio. The studio hasn’t revealed any information regarding the pricing for the lamp and they haven’t also said whether the lamp would be available for purchase through an online store or not.