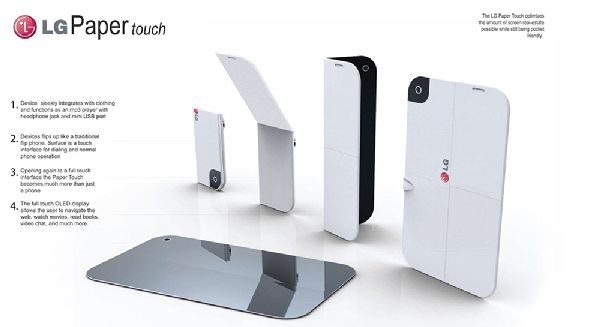 LG PaperTouch phone, unlike other traditional phones, forms a unique bond with the user. The phone looks like a traditional pocket-sized phone with a touch surface. Nevertheless, when it unfolds completely, it becomes a tablet for ultimate experience of web browsing.

The device connects the user with the world while still keeping the privacy intact. This can be attributed to the ‘Walled garden’ and ‘video texting’ features. The phone enhances communication on a person level. The incorporation of privacy based features do justice to its tagline- ‘Find your own Peaceful Garden in a Concrete Jungle’.

The concept behind the design of the phone was to provide the user a private space while still locked in the crowd. Additionally, the aim was to integrate multimedia in the everyday lives of users and, thereby, the unique design of folding out the phone and transforming it into tablet.

At the first glance, there isn’t much of a difference between traditional phones and LG Paper Touch phone. The real difference would stand out once the phone is unfolded four times for varied uses. The phone gives you the freedom to four-fold it like a paper. The folds are put together with the help of elastomer joint. The phone user also gets the usual features of headphone jack and USB slots. In its original form, it shapes up as flip phone with touch keypad. When the phone is fully unfolded, it flaunts an OLED display that helps the user with easy web browsing, video chatting or book reading.

The four fold and flip option make the device user friendly. It caters to user convenience. When fully unfolded, it caters the function of a laptop. As a folded device, it caters to the normal phone use. Above all, the phone respects the privacy of an individual with simultaneous integration of multimedia in their lives. Clubbed together, it is an all-in-one phone.

For the young generation, who crave for that extra private space and latest technology, LG Paper Touch phone seems like a best buy option. Though the geeks would be attracted to the unusual tech-design combination, the target group would majorly comprise of youngsters.

Complex at the Centre of the Universe...

Decorate your walls with Joyn Snowflake