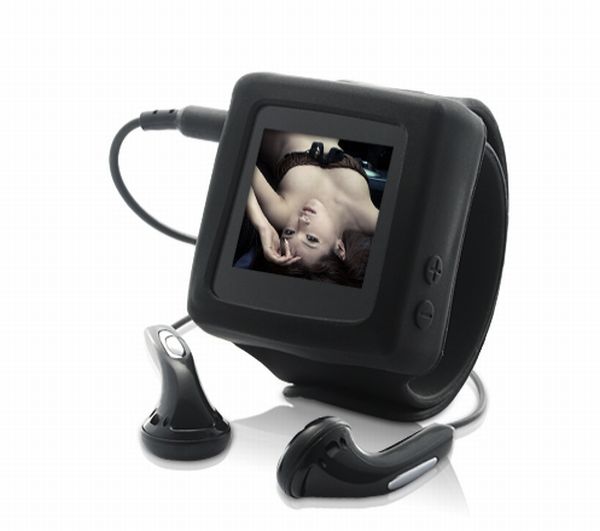 You know a product is desperate for sales when the manufacturer advertises it with a scantily-clad woman. But I guess the lack of enthusiasm from major watch manufacturers isn’t enough of a deterrent for our friends in China who are determined to make the media-on-a-watch concept popular come hell or high water! The latest gizmo in the series of watches-with-extra-features is the Timesnap, the watch that also has an mp3/mp4 player, an FM radio and a sound recorder built into it.

With a flexible snap-and-grip strap, the watch attaches to your wrist or upper arm without being too firm or too loose which makes it perfect for kids. The Timesnap also attaches to bags and clothes via a clip.

The media features on the Timesnap allow it to be a dedicated music player. The device is compatible with mp3, wma, and wav sound files, videos in mp4 and avi format, images in jpeg, bmp, gif and even e-books in txt formats. The built-in sound recorder saves files in wav format. The device allows users to not only listen to music but also view photos, e-books, and a calendar. A cool sing-a-long feature displays lyrics of the mp3 being played on the screen.

The best thing about the device that it only has four function – buttons-up, down, on, and ok – which makes it very uncomplicated to use. The device comes with a 4GB TF card with memory expandable up to 8GB, which allows users to use the watch as a portable memory stick without having to carry around an extra thumb drive.

Timesnap comes with a full color 1.5-inch screen which is housed inside a Weather-resistant plastic casing. The device also has a 3.5mm audio jack and USB port and 3.5 mm stereo earphones as well as the drivers for the device are included in the package. At $36.51 a piece, Timesnap is a very good investment as a gift for children as well as adults, inspite of the jokes we made at its expense!