How could one imagine about skyrocketing towers without taking inspiration from the tallest trees around the world and the heavenly mountains? Nature influences art in more ways than one. However, no matter how hard we try, as of now it seems impossible to ever compete with nature in anything. The highest point of the earth (Mount Everest) is natural, and even the deepest cavern inside of the earth (Challenger Deep) is natural. After centuries of technological advances, we are finally at a point where we can explore these wonders, but we are still a long way of when it comes to competing with them. Nevertheless, some mind-boggling designs like The Ultima Tower show that we might achieve this feat in the distant future. 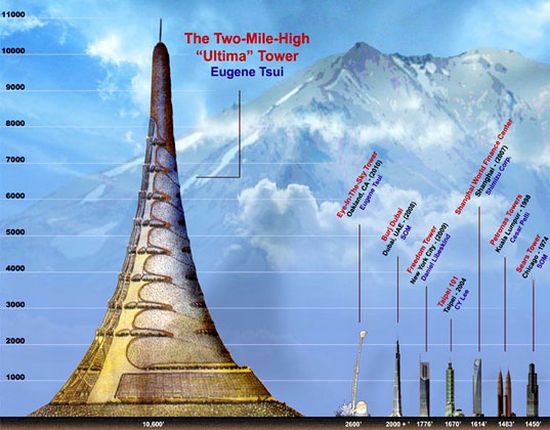 Mount Everest by far is the highest point on earth. But Mount Everest could look dwarfish if this outrageous yet supposedly planet-friendly concept sees the light of the day. The Ultima Tower is one grandiose plan of architect Eugene Tsui that aims to rewrite the very meaning of gigantic.

The Ultima will stand two miles tall and to give you a perspective of how tall that is, try and picture two and a half Mount Everests atop each other. Coming to the structure of the Ultima, Eugene has designed it on the lines of a giant termite nest that will have a footprint of 7000-foot diameter and will be surrounded by a gigantic manmade lake. 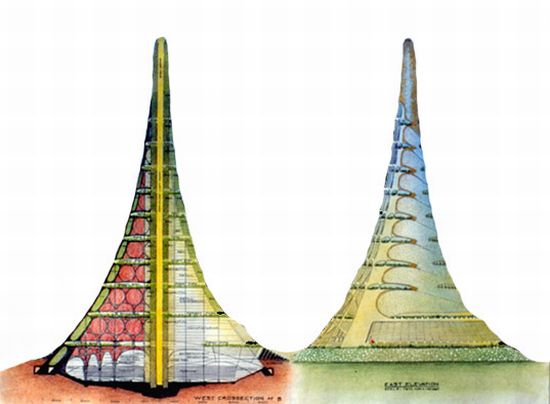 This will give this structure real stability to withstand rough climatic and geological conditions. Solar panels that line the entire outer surface of the Ultima will provide the energy requirements of this life space. Furthermore, wind energy too will be tapped to produce power.

Taking the green bits further, the mega-dwelling will use cars powered by hydrogen power and will use vertical propulsion systems running on compressed air. All this will make the Ultima a very sustainable structure. However, the project itself looks too grandiose to actually materilize in the near future. But as long as the Sheikhs from Dubai are around and rolling in money, even something as huge as the Ultima looks very possible.

Futuristic towers that might compete with the wonders of nature 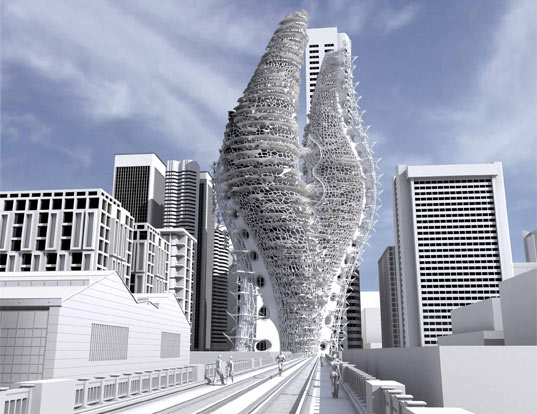 Designed by Olivier Colliez, Julien Bourgeouis, Cedric Dounval, Savinien de Pizzol and Romain Grouselle, this innovative structure would most certainly be a path-breaking building, with its potential to sustain its inhabitants independently.

The building basically functions around a concept in which the sound kinetic energy is popular as the ‘cilia; that cover the Soundscraper which are noise sensitive and take in the noise pollution for harnessing clean energy.  This design is an entry at the 2013 eVolo Skyscraper Competition.

After picking up the noise, the energy harvester would convert it to kinetic energy and the transducer cells would then transform it to electricity which can then be stored or passed onto the electrical grids.

The developers and designers of the Soundscraper project believe that each of the buildings could produce energy to the tune of nearly 150 MW in a populated and busy city like Los Angeles and would, therefore, be able to suffice 10 percent of the electricity needs of the city.  This green energy would also reduce the carbon footprint of the city and its increased dependence upon fossil fuels which are non-renewable.  Hence, these Soundscrapers would be extremely viable in the busiest metropolises of the world by making these cities self-sufficient in terms of their energy needs. 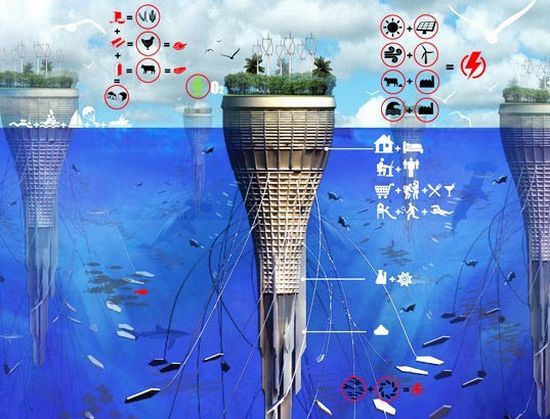 With rising sea levels due to changes in climate threatening the coastal cities worldwide, the need for floating or underwater cities and architectures is more than ever. Conceived by Malaysian designer Sarly Adre Bin Sarkum, the “Water-Scraper” is a self-sufficient underwater architecture that employs a variety of sustainable technologies to produce renewable energy and grow its own food.

Fulfilling its energy requirements by harvesting wave, wind and solar power, the floating city makes use of modern techniques of farming, including aquaculture and hydroponic methods, to grow its own food underwater. While a system of ballasts, supported by a set of squid-like tentacles that generate kinetic energy, keeps the structure steady in an upright position. Considering the fact that 71% of the Earth’s surface has water cover water, which is likely to increase due to the environmental changes in future, the underwater skyscrapers or cities provide a ray of hope to sustain life on earth. 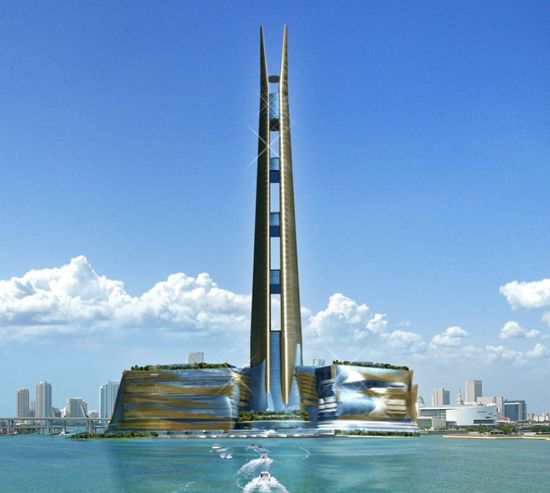 Developed by Kobi Karp, a Miami based architectural and interior design firm, the “Miapolis” is a 975-meter high tower planned for Watson Island that if constructed will surpass Dubai’s Burj Khalifa by 183 meters. Accommodating an amusement park, observatory, restaurants, 1.96 million sq ft of shops, over 1000 apartments, 1 million sq ft office space and a 792-room hotel, the 160-story superscraper will create 35,000 permanent jobs and generate $39 million to the City and $2.5 billion to the local economy annually. 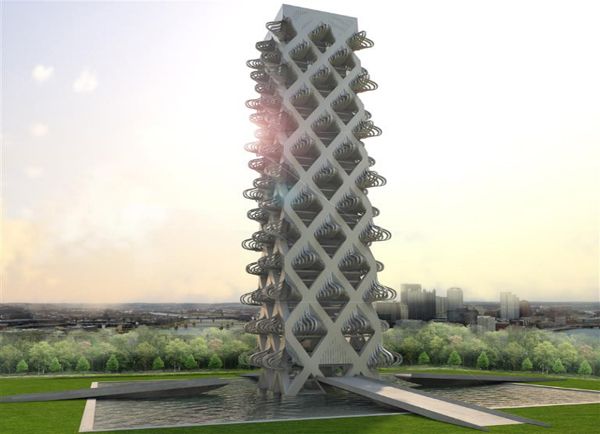 Belgian architectural team Kinetura is about to revolutionize customary perception of a skyscraper by adding a progressive fourth dimension to its Kinetower project design. The futuristic design, on display at Euroluce 2011 in Milan (12-17 April), physically modifies its structure to allow in sunlight and air as desired by its residents.

Kinetura designing team, comprising of architects Barbara van Biervliet and Xaveer Claerhout, with this new design certainly breaks customary barriers of static structural designs and try to reach beyond. Keeping pace with other fields of progress, the designers have tried to transform the otherwise rigid and inert structure into multifaceted anatomy to regulate solar energy and ventilation efficiently. The motion brought about by innovative technology concentrates on dynamic windows and the lever that cause it to open outward or inward. 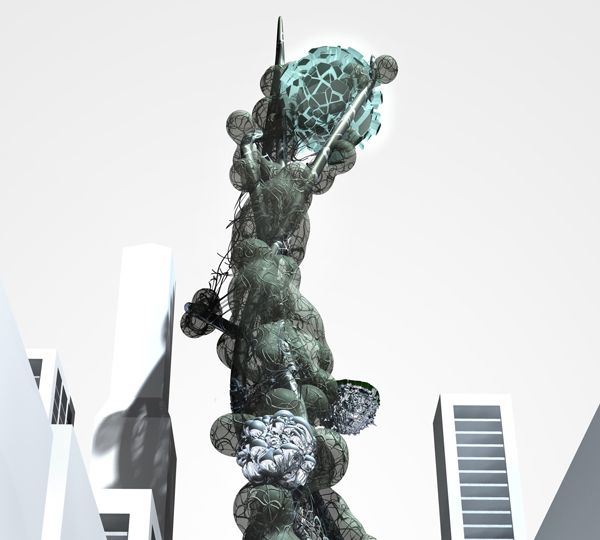 Poland-based students of architecture have created a futurist design of a skyscraper office building with their proposed design named the ‘Saprophyte’.

Karolina Czochańska, Emilia Dekarz, Paweł Dudko and Justyna Krupkowska designed this structure keeping in mind what the future withholds for the generations to come. Their design is based on the theory that in the future the human-kind will witness such technology that would reduce the travel from home to work and back to a minimal. They also believe that a day will come when the concrete jungle will be abandoned and people will begin to adapt to the trend of working from home. And for this a more live-able form of environment is what these students propose. The sort-of unbelievable design proposes more buildings to sprout from the master structure.

Keeping the eco-friendly principles in mind, the building’s design declares itself to be effective and economical as it features a self-content, energy-efficient structure. The building is suggested to expand in stages. The main core of the structure continues to grow in stage two. When the building reaches a permanent form, other parts begin to grow. The third stage is ever-evolving, as it keeps adapting to the rapidly changing environmental conditions.

Mimicking nature, this future building will have the capacity to cleanse itself, store both electricity and water, thereby doing no harm to those around it – just the way plants are.