Seek is a novel new Informational Navigation system created especially for the hearing-impaired that would allow them to attain a higher level of independence especially when it comes to traveling and exploring new places. Created by Cleveland Institute of Art graduate Jesse Hill, Seek is a revolutionary new design that looks to integrate the hearing-impaired more efficiently in the hearing society. The system basically is designed to help hearing impaired users to navigate and explore without being assisted. 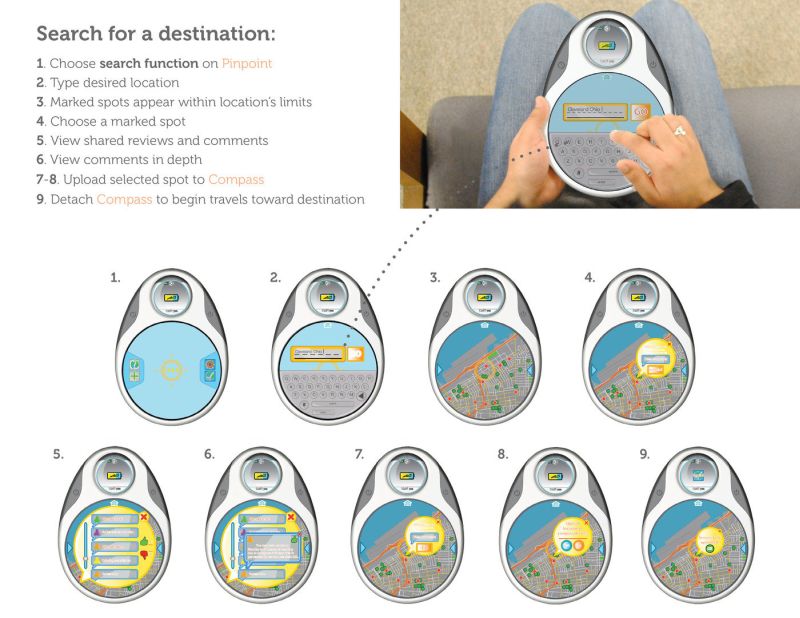 The system is composed of three basic parts, Pinpoint, Nate and Compass. Pinpoint is the stationary device that helps users record and keep a track of where the user has been in their entire day and helps share that information with other users in the Seek community. Pinpoint basically works like a GPS transmitter that records your travel route and destination as you go there. Pinpoint can easily be placed on a table by folding its legs to a preferred typing angle to enable the user to easily input their comments, reviews and other data. The legs can also be easily folded in to let the device hanging on the wall.

The second part of the device is called Nate which is a locator and helps users search for businesses and stores while exploring a particular
area. Nate saves users’ preferences and reviews from other Seek users and helps users choose stores and other establishments intuitively. The third part of the device is the Compass which is the portable component of the Pinpoint. The Compass acts like, well, a compass and helps in navigation. The Compass attaches to the Pinpoint via a magnetic patch and charges via a wireless. The information is transferred between the pinpoint and the Compass through Bluetooth.

Seek is basically is a specialty item that focuses on mainly being a navigator although its interface and functionality aren’t any different from the regular GPS systems available in the market. The deaf-friendliness of the design could really have been improved if the device could be used with hearing aids via Bluetooth.