You can’t explore the sea the way you can explore it on a yacht. Unlike most of the boat designs, these aren’t just for fishers, sailors and others who can bear the brunt of the sea. The main purpose of yachts is luxury. All you need is enough money to have the yacht of your dreams. Furthermore, for the eco-conscious, there’s a range of eco-friendly yachts too. These come in all sorts of ranges, from solar yachts to human-powered ones. Here is a list of Day 42‘ and nine other extraordinary yachts that are taking luxury to a brand new level. Check them out. 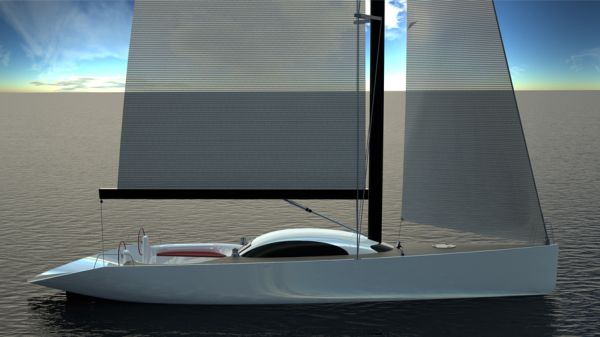 Out with neat cuts and great performing skills is an elegant sailor named Day 42’. Maximum beam is moved aft which gives cockpit and helmsman ample space. Since all apparatuses are concealed, the whole deck looks spotless. Layout of the deck is such that it can be used by a single person. Open style of the deck tends to make the hull look very sporty. 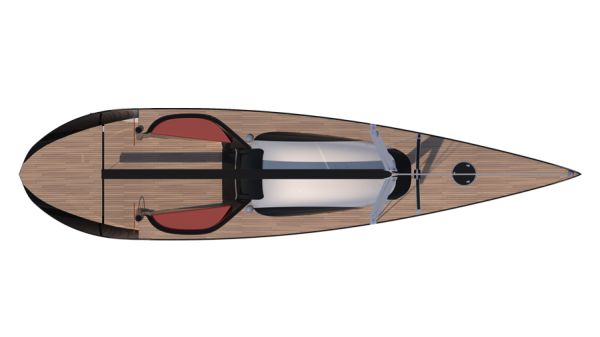 The boat can rush at high speed with light or medium winds. The hull adds to all the seaworthiness and performance level. Carbon fiber, PBO, stainless steel and lead have been used to craft the whole thing. The front area has a double berth cabin with a large sofa placed in the center and a gallery. Steering clear of the backstay are the spreaders which have been brushed back. Other features include the rig with a fractional 9/10 and a high ballast/weight ratio (50 percent). 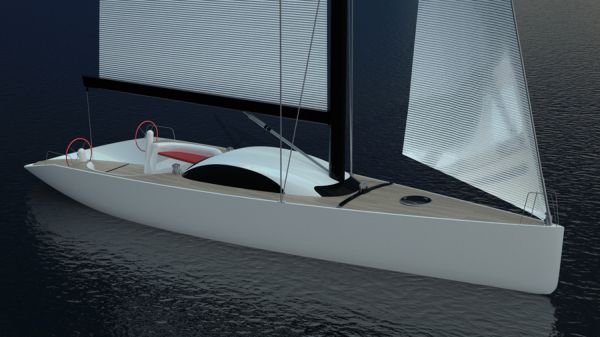 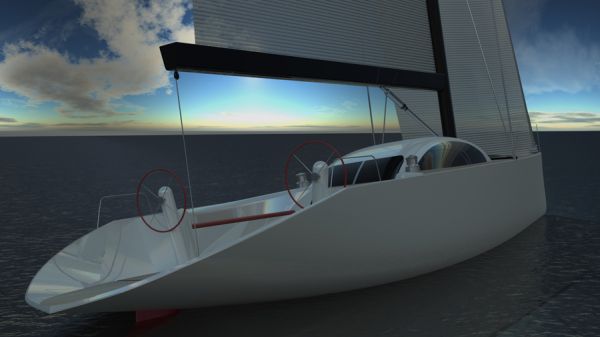 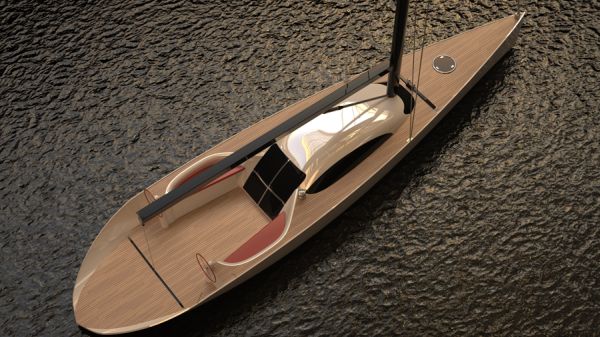 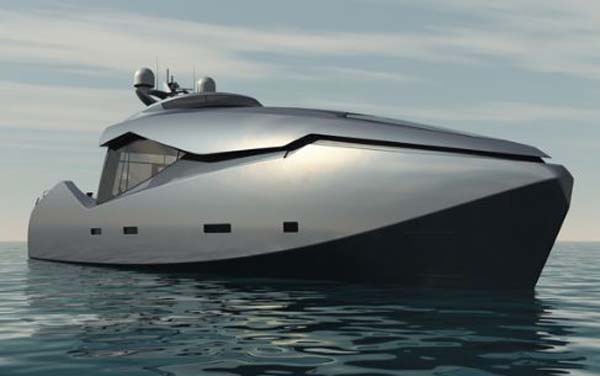 The recently unveiled marine designs by South Korean Naval architecture studio CanariaOcean of their superyacht project has been inspired and named after the blue whale and has left many yearning to own this astounding beauty of the seas. Designed after the Rorqual Whale, or baleen whales and supposedly family to the largest animal that has ever lived on earth, the focal spotlight of the Blue Whale, pioneering designer Young ha Kim elucidates, was to exploit space efficiently. The slender and streamlined body of this steel and aluminum 37 m Blue Whale encases three double guest suites and accommodation for eight crew members.

Designer Kim says that the bow of this luxurious cruiser is designed to resemble the mouth of a blue whale, and contains one of the striking features of this luxury yacht, the forward salon. This is actually the front window of the yacht but when required the glass roof slides up and lifts up the salon or a seating arrangement, enchanting guests with sweeping panoramic view upfront. Also towards the rear, there lies one more interesting feature, the sliding cabin. The yacht here stretches out to offer a bonus interior space for guests to pleasure in and includes a swim platform. The yacht’s wheelhouse is above the main deck to allow privacy of the guests away from the crew. Furthermore, it also features zero speed stabilizers that will help maintaining its low profile making it more stable. 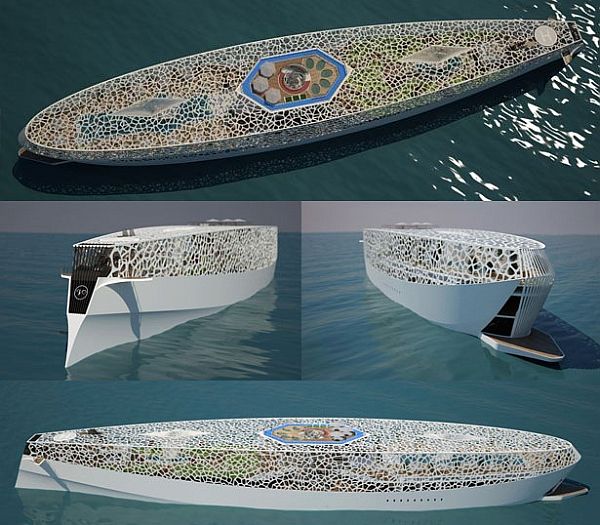 Elegant, luxurious and comfort stands synonymous to Voronoi yacht. Designed in line with Voronoi pattern, this exclusive yacht is 125 meter long and features striking exterior as well as interior superlative amenities. Enclosed by a Voronoi structure with colorful, sparkling designs, the yacht adds life to your yachting experience. It has all the requisite amenities to meet and exceed the expectations of the guests such as an indoor garden, spacious swimming pool on the bridge deck and a well equipped salon. Last but not the least, this megayacht also features amenities such as bar, galley, stage for musical and dance performances along with a world class dining room.

Premium quality material was sourced from reputed vendors to design it, offering optimum luxury and comfort to the owner. It comes with an exclusive owner’s suit, personalized sauna, dress room, spa and toilet. Its main entrance is spacious enough leading to the kitchen area. In addition, it also includes a cozy office space and a luxurious bedroom. Its luxurious interiors are as rich and contemporary as its technology makes it stand out among other yachts of its league. 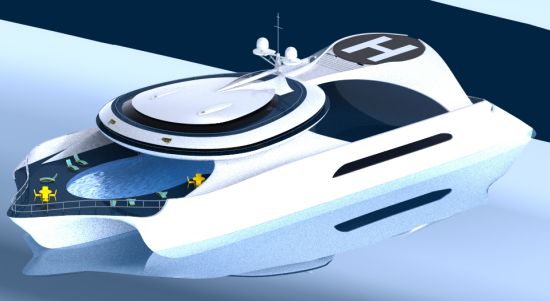 Visualizing the future of personal cruise ships, Indian designer Aviv Nair has come up with a yacht concept that draws inspiration from Star Trek and modern hull design. Entitled the “Celestis,” the luxury yacht allows a secluded retreat with family and friends. Ideal for hosting personal parties, the futuristic yacht features a swimming pool at the front deck and a helipad above the rear deck to land your chopper, so you could access the yacht without even grounding your feet on the dock. Unfortunately, we are short on other technical aspects, but the advanced design speaks of the luxury and comfort of the vessel.

4. The Island Yacht with Volcano

Yacht Island Designs, a Company from the UK has decided to build this unbelievable yacht. The yacht is featured with facilities like cinema, game room, gym and sauna. The outer side of the yacht contains a swimming pool, guest cabanas a bar and outdoor dining system while the inside is equipped with VIP guest suites and an amazing owner’s suite within the volcano. 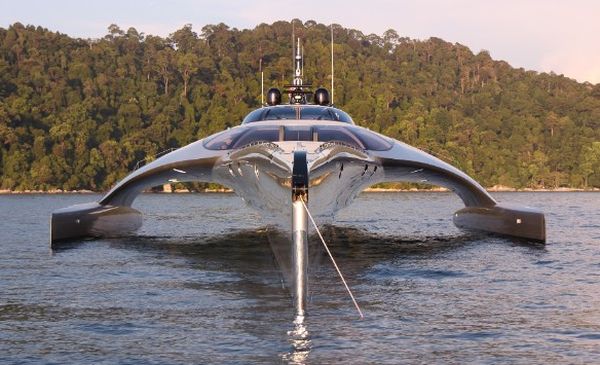 This is an all-new concept yacht with an iPad app to control it, which is also its unique feature. Named as Adastra, the yacht is a trimaran yacht, which is 139 foot in dimension. It is exclusively designed to travel long distances around the Pacific Ocean. It took more than five years to complete the yacht and it costs above $15 million.

The “Eclipse” is the world’s longest and most expensive yacht with an estimated cost $800 million. Russian billionaire, Roman Abramovich is the proud owner of the yacht. The grand yacht boasts two helicopter, 24 guest cabins, swimming pools, and an array of hot tubs and a disco hall. It is also equipped with launch boats and a mini-submarine that is submersible to almost 50 meters. Around 70 members operate the yacht. 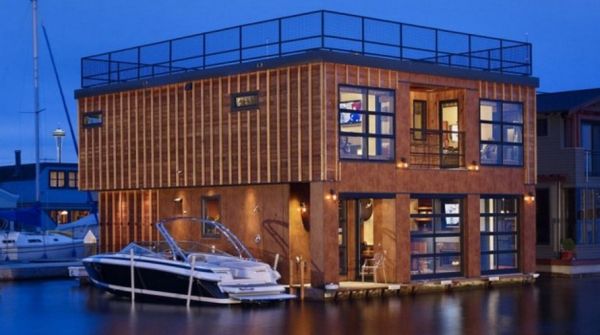 This astonishing floating home is the creation of X-Architects with an upper deck that conceals a kitchen, living room and a dining area. The lower deck of the yacht contains bedrooms, bathroom and steering cabin. The dimension of the incredible yacht is about 20-by-6.7 meters. The yacht also has a terrace that can be reached with a spiral staircase. 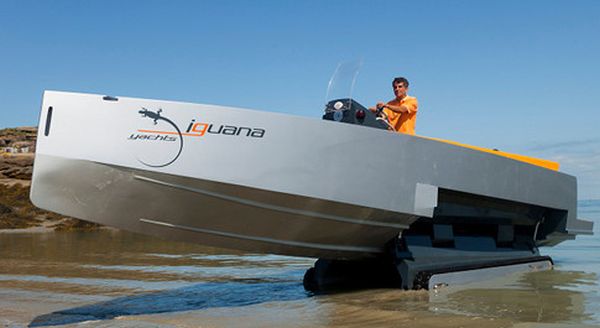 This amazing speed yacht which is named as “Iguana 29 Amphibious Yacht” has been loaded with a pair of retractable treads that allow the yacht both, travel into the water as well as carry the boat to a hard land surface. Since it is an amphibious vehicle, it can easily rise above the water and drive on the land.