Nothing symbolizes a civilization better than its buildings and bridges. Each new element that we introduce to our bridge designs speaks volumes about our present world. Nowadays, apart from utility and aesthetic beauty, we have a new parameter, sustainability. It shows us that we are finally realizing our impact on our planet and are working towards minimizing it. In most of our modern bridge designs concepts, we can see this factor. Drava Bridge is one example of the same.

The bridge envisioned across river Drava in the Slovenian cit of Maribor is a pure delight. The bridge combines unmatchable aesthetics with functionality in public infrastructure. The concept is both simple and dynamic. In a seemingly weightless fashion the bridge gently bends to rise after elegantly skimming the water surface. The span broadens at its lowest point to facilitate recreational space for city dwellers. 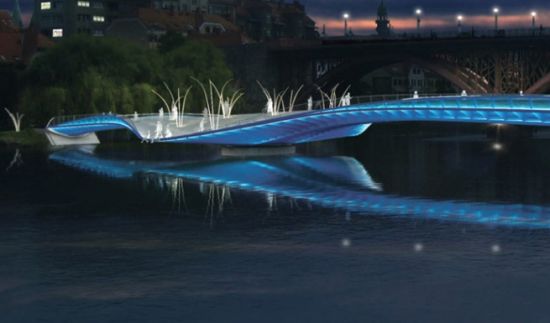 The tiered water side space also provides safe transit across the river for both cyclists and pedestrians. Fabricated from steel tubes and sharp frames the cultural infrastructure by Buro Happold promises to be a great waterside recreational space. 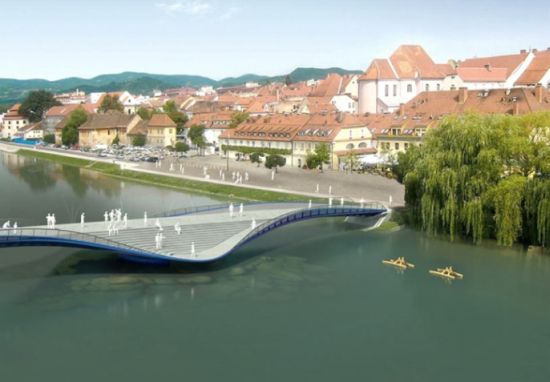 Some Other Iconic Bridges and Bridge Concepts

Here is a list of some bridges, a few have become iconic through time, whereas others are recently developed and yet they all are a sight to behold. 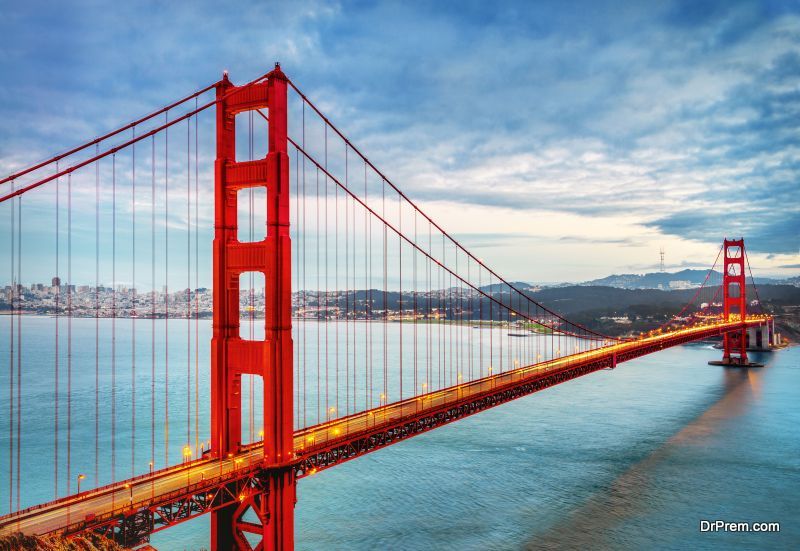 Unarguably, the most famous bridge on the planet the Golden Gate Bridge symbolizes the great city of San Francisco and is after the Statue of Liberty, the symbol of America. It is the most photographed bridge and a sight to behold. The Golden Gate Bridge was built in the year 1937 and was the longest suspension bridge in the world for well over 25 years. Often engulfed in fog, it has been the setting of many movie scenes.

However, the golden gate is also a location of morbid curiosity as people committing suicide often use the bridge. Though measures have been taken that have drastically reduced the number of jumpers, it still is a concern. All this does not deny the fact that it is an architectural and technological marvel, and for over seventy five years, it has been a must see destination. 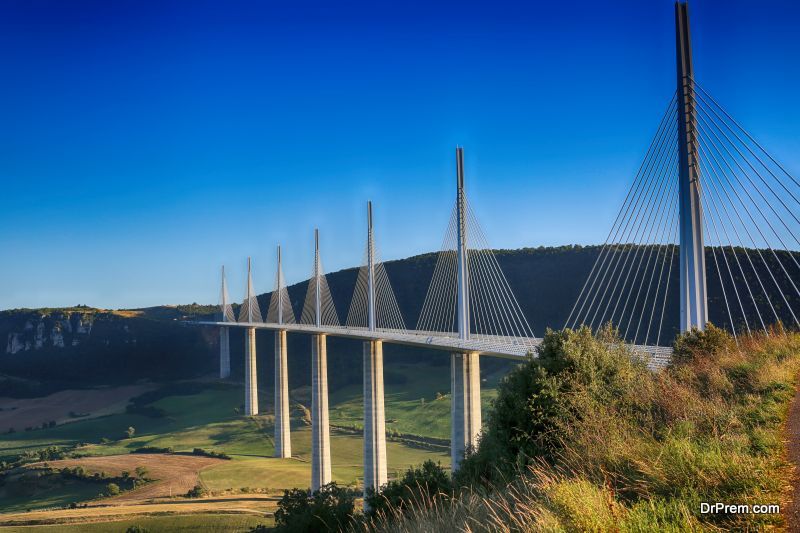 The Millau Viaduct is another bridge that seems more in place with a fantasy book than real life. Ranked as one of the greatest feats of engineering, this giant behemoth spans the Tarn River in Southern France and contains the world’s highest pylons. It is the highest road in not just its country but in all Europe and is even taller than the much famed Eiffel Tower.

Built in 2004, the Millau Viaduct became the tallest bridge and has yet to be replaced from the top. The engineering genius deployed here is unique in that it is built using a “cable- stayed, masted configuration” which gives it a sleek, almost minimalist look. A visit to the bridge depends on if you are in the area, and although nowhere as popular as other tourist spots in France, the Millau Viaduct often brings out many emotions out of people who first witness it. 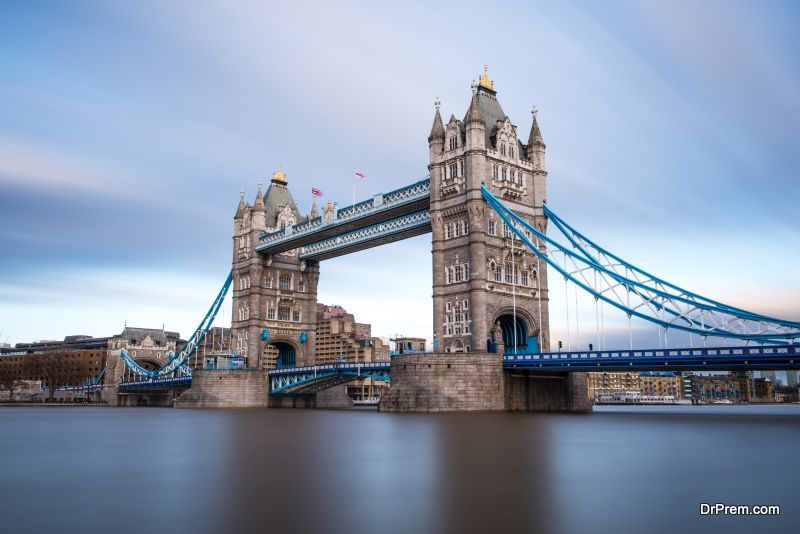 The Tower Bridge works on the electro hydraulics system which is used to raise it when ships need to pass. Although a busy crossing above, river traffic is always given top priority and larger ships have to give a 24 hour notice before they arrive for the bridge to be lifted.  A recent installation is a glass floor which allows you to walk on and stand about 40 odd metres above the river Thames. The Tower Bridge should be on the list of anyone visiting London. 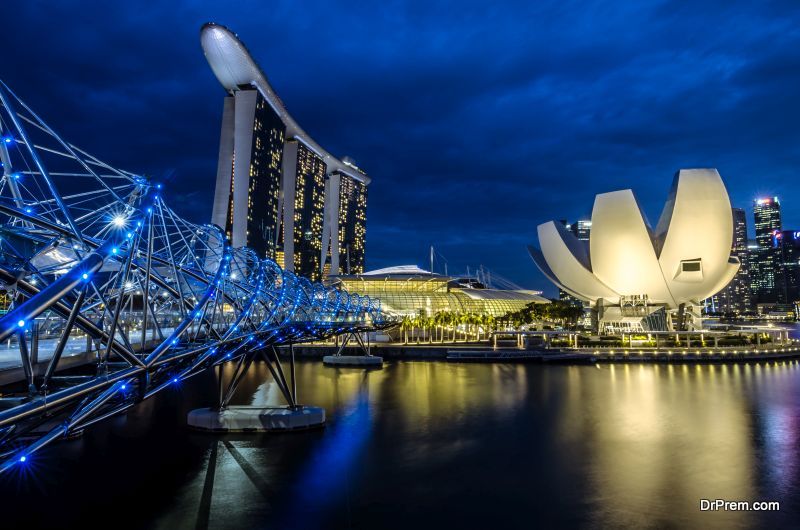 The Helix Bridge is the longest pedestrian bridge in Singapore. It is a sight to behold. Although it is a relatively new bridge, people already call it a feat of engineering and architecture. Its stainless steel material gives this bridge a unique look. It helps accentuate the already beautiful Marina Bay area of Singapore. At 280m it is nowhere as long as most other bridges on the list. Moreover, it is not as awe inspiring as the Millau Viaduct or the Golden Gate. But, what it lacks in numbers, it makes up in its unique style and structure.

Apart from its aesthetic purpose, the Helix Bridge also serves as a way to get quick access to the Marina Bay sands all the while providing stunning views of the Singapore skyline.  There are viewing pods extended from the bridge to allow pedestrians to take a break and take in the views. 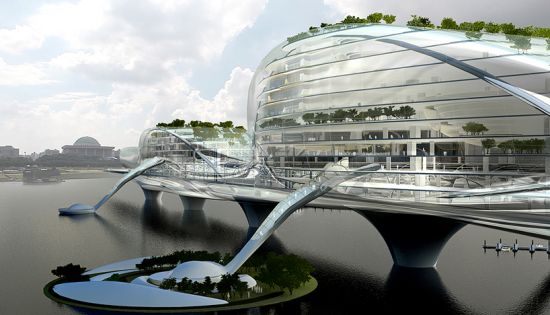 Seoul-based architectural practice Planning Korea liberally tinkered with curves and frames to create the profoundly interesting Paik Nam June Media Bridge named after the famed media artist over river Han. Spanning over 1080 meters, the bridge connects the Dangi-Li power plant with the national assembly building to the south, thereby expanding the city fabric onto the water. 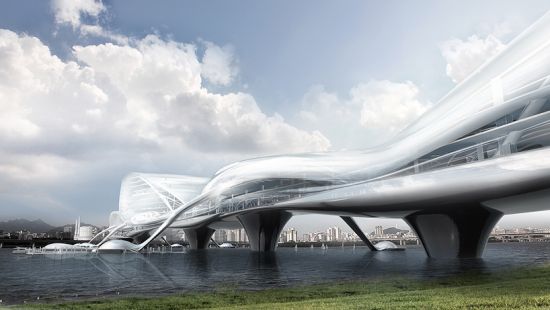 Envisioned for pedestrian use, the multi floored structure is equipped with its own energy generating programs. Clad in solar panels, each floor flaunts a garden with a rainwater collection system allowing sufficient natural sunlight and ventilation. Apart from supporting public facilities such as a museum, library and an IT complex mall, the bridge also features docks for water taxis, yachts and cruise ships. 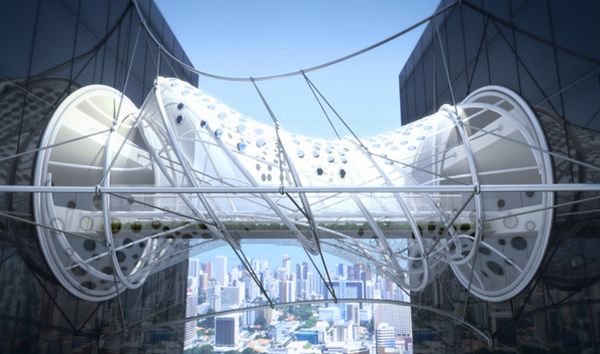 This flexible and tensile Helix-shaped bridge caught the attention of many people after its recent win at the Building to Building Pedestrian Bridge International Challenge. Created by Sanzpont, the bridge is aptly named DSSH (for Dynamic ShapeShifting Helix) because of being self-sustainable, dynamic and impressive. The bridge also features the use of LED RGB technology.

The tensile nature of bridge makes it dynamic as per the usage. The structure applies more tension at different touch points when people cross the bridge undergoing technological deformation. The LED-enabled glowing structure is a visual treat at night and the low-power consumption technology changes colors and enhances the fluid and organic forms.